"Zazu gets fired when he makes a simple mistake."[1]

When Zazu comes home, he finds a big mess in the house. Gopher, Zazu's mole assistant, tells the hornbill that he was reorganizing, but Zazu forces him to unreorganize because the inspector is going to visit the next day. Gopher shows Zazu that the schedule has not been changed and therefore, the inspector is coming the current day, which makes the two panic.

Zazu swiftly cleans up his house and hides the mess to another part of his tree. But he soon realizes that the place he hid the mess is where the inspector is. When Zazu opens the door, causing the mess to get back in, the hornbill finds the inspector in his trash can.

After recounting the animal population, Zazu falls asleep and has a nightmarish vision that he is surrounded by 1's. After Zazu wakes up, he runs into Rafiki. When he asks Rafiki if he knows which animal he forgot to count, the baboon shows him his reflection, making him realize that he forgot to include himself on the list. Zazu therefore flies back to his tree to get his job back.

While Zazu is on the way to his home, he finds some animals being incorrectly placed: elephants on trees, giraffes in holes, and fish in the sky. He sees that Gopher is responsible for the problem. While the inspector scolds Gopher for his job, Zazu returns and shows the inspector his now-complete list of animals. The inspector then begs Zazu to return to his job, stating that he never should have fired him in the first place and the hornbill agrees.

However, it is shown that Zazu and Gophers jobs are switched (although they are back to their original positions by the episode "Zazu's Off Day Off"). 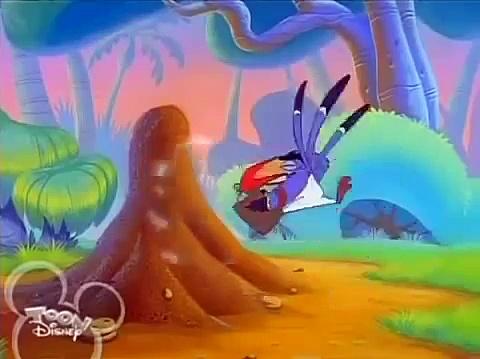