Start a Wiki
watch 01:39
The Loop (Movies)
Do you like this video?
"Yummy Yummy Yummy" is a bubblegum pop song by Arthur Resnick and Joey Levine, first recorded by Ohio Express in 1968. Their version reached #4 in the U.S. Pop Singles chart in June and #5 in the UK Singles Chart. It has since been covered by many artists. Ohio Express was a studio concoction and none of the "official" members appear on the record. Joey Levine sang lead vocals.

Timon and Pumbaa sang a version of the song with altered lyrics in a music video featured at the end of the 11th episode of The Lion King's Timon & Pumbaa, as they express their love for eating bugs. As they perform the song, Timon and Pumbaa fight over a single bug, only to find out at the end that the bug they've been pursuing is a stinkbug. The music video was produced and directed by Steve Moore and aired on October 14, 1995, along with "Madagascar About You" and "Truth or Zaire". 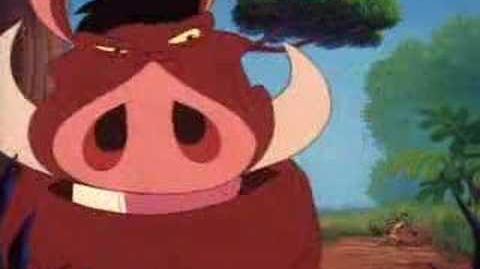 "Yummy Yummy Yummy"
The "Yummy Yummy Yummy" music video featured after "Truth or Zaire"
Add a photo to this gallery
Retrieved from "https://lionking.fandom.com/wiki/Yummy_Yummy_Yummy?oldid=248536"
Community content is available under CC-BY-SA unless otherwise noted.