"Timon and Pumbaa go gold mining in the Yukon, and Timon falls prey to the manipulations of Kusko Quint."[1]

Timon and Pumbaa are in Canada looking for gold. Pumbaa is doing all the hard work, while Timon relaxes and reads magazines. Pumbaa doesn't think it's fair that they split the gold if he's the only one doing everything. Timon gets angry and draws a line saying that "everything he finds on his side, he can keep it, and everything Pumbaa finds on his side, Pumbaa can keep it".

Pumbaa then finds a giant gold nugget, while Timon only finds a bottle cap labeled Caribou Cola. While Pumbaa is impressed by what Timon found, the angry meerkat forces him to stay on his side of the line. While there is a conflict between Timon and Pumbaa's friendship, a mysterious man watches Pumbaa's gold nugget from above and decides to steal it soon.

There's a party for Pumbaa, who is upset because he misses his best friend. While a bar girl tries to cheer the warthog up, Timon watches from a window outside, freezing cold. Although he is jealous of Pumbaa's richness, he is too pride to go. The man from earlier shows up and reveals himself to be a con artist named Cosco Quint. He convinces Timon that the gold belongs to Timon and that he should steal it from Pumbaa. Timon is reluctant to do so since he is Pumbaa's friend, but Quint tells him not to worry about it and hatches a plan on how he can steal the gold, which is Timon distracting Pumbaa with a little "show", while Quint puts the gold in a bag.

Quint and Timon meet backstage, with Quint giving Timon the bag and running away. Pumbaa then shows up and wonders what Timon has in the bag. The guilty Timon can't keep the secret and tells Pumbaa that he stole the gold and that it's inside the bag, but when Pumbaa looks inside, the bag is empty, making Timon realize that he got tricked and the two team up to retrieve the gold nugget. While Timon and Pumbaa chase Quint (and his pet snow dog) for the gold, but end up falling but landing safely in a deep snow. When they can't to a frozen lake, they can't find Quint. Quint breaks the ice, puts a motor in the ice where Timon and Pumbaa are on and sends them away

Timon apologizes to Pumbaa and offers him the Caribou Cola bottle cap Timon found earlier, and they become friends again. They decide that they'll never let money interfere on their friendship. They crash into a submarine, and a rich man appears saying that he has been searching for a bottle cap like that for 17 years and will pay any price for it, so Pumbaa and Timon fight over the bottle cap. 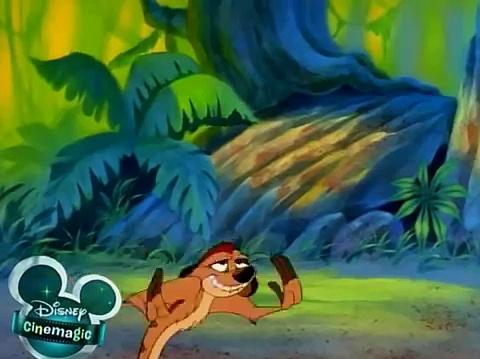 Retrieved from "https://lionking.fandom.com/wiki/Yukon_Con?oldid=296539"
Community content is available under CC-BY-SA unless otherwise noted.