You May Have Already Won Six Million Bakra

"You May Have Already Won Six Million Bakra" is the first segment of the sixteenth episode of Season 3 of The Lion King's Timon & Pumbaa. It aired on April 16, 1999, alongside "My Meteor, My Friend".

"After trading roaches for a lottery ticket, Pumbaa becomes a millionaire."[1]

Timon and Pumbaa find two cockroaches passing by and Pumbaa decides to catch them. After Pumbaa catches the roaches, he runs into a dingo, who wants to give the warthog a lottery ticket if he gives him the roaches, telling him that it will make him rich and he and Timon will be able to buy all the bugs he wants. Hearing the dingo's words, Pumbaa agrees.

While Timon is prepared to eat the roaches, Pumbaa tells his friend that he traded them for the lottery ticket. Timon, however, is unimpressed with the ticket and scolds the warthog for allowing himself to be swindled. He then tells Pumbaa that he wants nothing to do with him and his ticket, much to Pumbaa's depression.

A paperboy then shows up and gives out one of his newspapers, where Pumbaa discovers that he won the lottery. At first, Timon becomes annoyed by Pumbaa for believing that he won until he sees the code on the ticket, making him be just as happy as Pumbaa. Pumbaa, however, starts to neglect Timon, telling him that since he is the one who caught both roaches and traded them for the ticket, all of his money belongs to him.

Pumbaa now becomes a millionaire and owns a rich house while Timon lives in a run-down shack. Later, Timon calls Pumbaa and the two friends talk about their new lives. Timon tries to have Pumbaa invite him for dinner, but the warthog messes up by thinking that it is Timon who invited him. He therefore goes to Timon's shack.

Pumbaa becomes concerned about the way Timon lives, but the meerkat claims that he is okay until he admits that he's not happy about it. Pumbaa suggests that since he is rich, he will rebuild his friend's shack as an investment and they will both make lots of money. After Timon and Pumbaa turn the shack into a condo, it unfortunately falls apart.

Later, Timon states that he was a bad investment as Pumbaa lost all his money on him. But Pumbaa states that the actual reason he fixed Timon's shack is that he is his bestest best friend and that's something money can't buy. 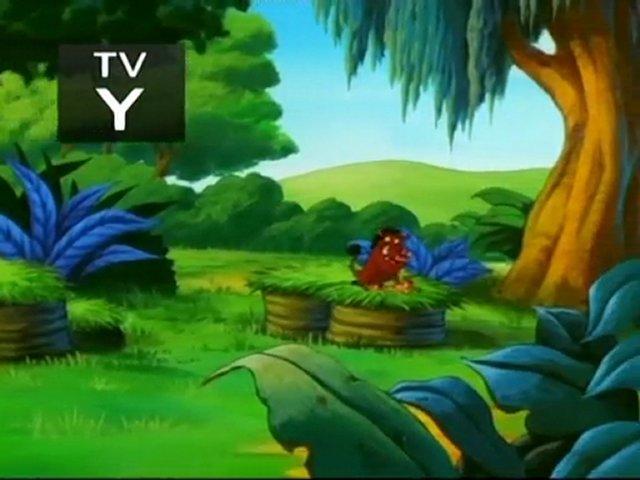