"Wishy Washy" is the first segment of the thirtieth episode of Season 3 of The Lion King's Timon & Pumbaa. It aired on July 23, 1999, alongside "Ice Escapades".

"Timon and Pumbaa find a genie's lamp and wish for a million more wishes."[1]

While Timon and Pumbaa chase some bugs, they find a magic lamp. The two friends rub the lamp, causing a genie to come out and give the two three wishes. When Timon tries to think of a wish, he accidentally wishes that he knew what to wish for, causing it to come true.

It is now Pumbaa's turn to wish, though he tries to think of one as well. When Timon rushes his friend, Pumbaa accidentally wishes that he had more time. Now that Timon and Pumbaa wasted two of their three wishes, Timon wishes for himself and Pumbaa to have a million more wishes and the genie grants it, in a suspicious way.

Timon and Pumbaa are now sitting on sun chairs next to a waterfall wishing for various things. As they are progressing, Pumbaa copies Timon's wishes, much to the meerkat's annoyance. After Pumbaa wishes for everything in the jungle to be beautiful, resulting in Timon wearing a blue dress with fruits on his head, he wishes to be somewhere else.

The wish takes Pumbaa to a frozen area where he gets captured by a pteranodon, making the warthog wish to return in the jungle next to Timon and the waterfall.

Timon starts to get annoyed by Pumbaa interrupting him while he tries to think of a good wish. When Pumbaa wishes for Timon to be a little more content, the wish is granted by making him disappear, leaving Timon. Timon, now happy to think of a wish without any further interruptions, wishes for a boat and then a bowl of soup. After his wishes get granted, he starts to miss Pumbaa.

Meanwhile, Pumbaa wishes for ten best friends (which are puppies), popcorn, and a bowl. He soon realizes how much Timon misses him and wishes that he could be with his true best friend. After Timon and Pumbaa reunite, Timon wishes that they have never found the lamp in the first place, causing everything, including the genie, to disappear and turn back to how they were before.

Timon and Pumbaa find the bugs they were chasing earlier and they catch and eat them. The two friends then realize that they couldn't wish for anything more than each other and their current lives. Meanwhile, the genie, now back in his lamp, is waiting for Timon and Pumbaa to make him come out again. 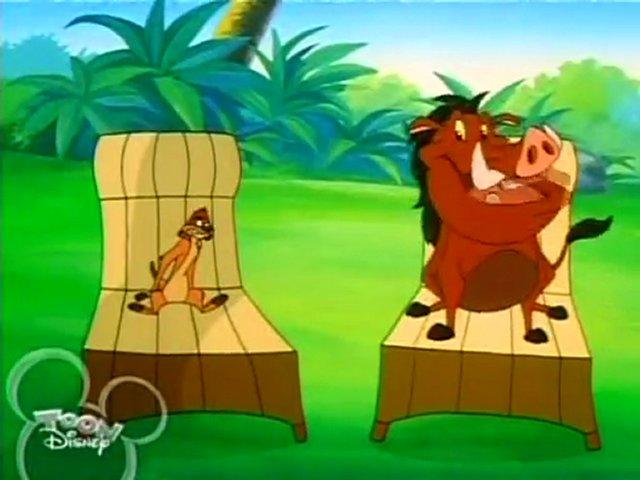