"Wide Awake in Wonderland" is the first segment of the sixth episode of Season 2 of The Lion King's Timon & Pumbaa. It aired on September 23, 1996 on the syndicated Disney Afternoon block, alongside "Zazu's Off-by-One Day".

"When Pumbaa can't get to sleep, Timon's bedtime stories transport them to a wonderland where the fairy tales take strange turns."[1]

An insomniac Pumbaa wakes Timon up to tell him a bedtime story. Timon makes up a quick story so that he can go back to sleep, but Pumbaa wants his friend to read him a real story. The warthog gives Timon a big book about meerkats and warthogs.

Timon starts reading a story about a hard-working warthog and a happy-go-lucky meerkat.

Timon is disgusted by the story while Pumbaa enjoyed it. As Pumbaa is still not sleepy, he wants Timon to read him another story, showing him one about Goldi-Meerkat-locks and the three warthogs, which he finds to be even better than the last one.

Timon dislikes this story as well, but Pumbaa, who is still not sleepy, wants him to read another story. Timon looks for a good story in the book, but it turns out that every story has warthogs in a good light and meerkats in a bad light. So Timon decides to make up a story about a meerkat named King Timin.

In the story, King Timin gets well-treated by a sun and a moon. Then, a ferocious fire-breathing wart-dragon appears and the king kills it with a toothpick. Then, King Timin defeats other kinds of warthogs, such as a grandma impersonating warthog, a mean old warthog "Rumpled-wart-skin", a warthog witch, a warthog genie, and a giant warthog from the beanstalk.

After Timon concludes his story, he sees that Pumbaa has been sleeping throughout his story, much to the meerkat's anger. 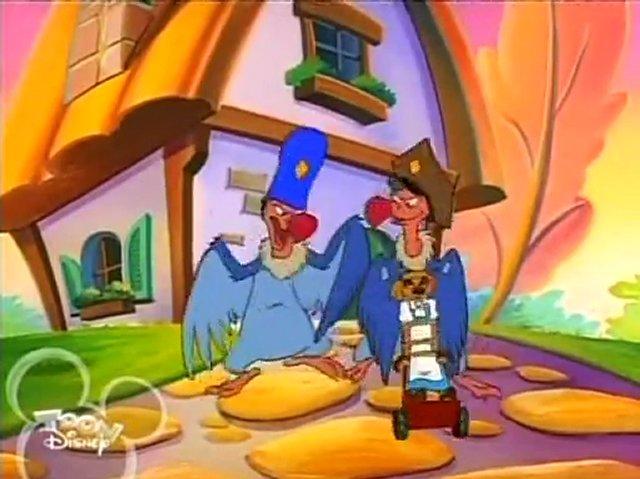