"Why No Rhino" is the second segment of the twenty-fifth episode of Season 3 of The Lion King's Timon & Pumbaa. It aired on June 18, 1999, alongside "Pig-Malion".

"Timon and Pumbaa run a safari to help a rich couple find a rare Blue Rhino."[1]

Timon and Pumbaa make an advertisement for anyone who would like to take pictures of exotic animals in their natural habitats, with Timon knowing that they could get rich doing this. The duo’s first customer is a rich couple named Eleanor and Julian Duberry. Eleanor tells them that they would like to take a picture of a big blue rhino. When the couple gives Timon and Pumbaa a check, the two friends decide to run the safari.

While the Duberrys are relaxing, Timon and Pumbaa have a hard time finding a blue rhino as it is proven to be very rare. Timon tells Pumbaa that they don’t have to give people what they want, they should show them what they have and convince them they want it.

The next morning, Timon and Pumbaa attempt to show the Duberrys the glory of the Serengeti. However, the couple is not satisfied and force the duo to give them their money back. But Timon tells them that giving money back is not their policy. The meerkat then realizes that Pumbaa did not remove the “giving back money” part in their ad when he told him to do so. The reason Pumbaa did not do so is that he realizes that it would be unfair to the customers and not giving back their money would not make them happy. Eleanor tells Timon that if they don’t show them anything productive the next day, he will be forced to give them back their blank check.

The next day, Timon decides to disguise as different animals, but Pumbaa refuses to do so, saying that he will not try to fool the Duberrys just to keep their blank check and that the money will be tainted. Therefore, Timon decides to do his scheme on his own.

When Timon brings the Duberrys to them, he tells them that Pumbaa is standing guard in case something bad happens. The meerkat dresses up as a cockatoo, a crocodile, and a giraffe. The Duberrys are not impressed and state that they are only on the safari for the big blue rhino. Eleanor tells Pumbaa that if Timon does not show them the rhino, they are leaving with their check.

Hearing what Eleanor just said, Timon talks to Pumbaa about how important it is for him to become rich, telling his friend what he can do with all the money and that he needs his help with the blue rhino. He then tells Pumbaa that the plan is not just for himself, it is also to keep Eleanor happy as she would see the blue rhino she and her husband have drove all the way to the Serengeti for. Timon then removes Pumbaa’s tusks to make them look like horns and tells his friend to think like a blue rhino while he gets the Duberrys.

The scene then cuts to the Duberrys talking about their safari experience to the people in their home. They then show them three of the pictures they took of Timon, Pumbaa, and the blue rhino, with everyone applauding at the end. 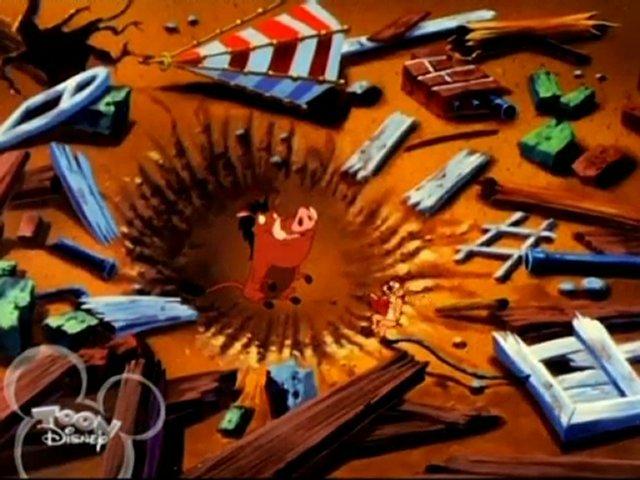