"Whiff" is the first segment of the first episode of Season 3 of The Lion King's Timon & Pumbaa. It aired on January 1, 1999, alongside "To Be Bee or Not To Be Bee".

"Timon and Pumbaa play golf to become as rich as the golfer they read about."[1]

While Pumbaa is napping, Timon reads an article in a newspaper about a golfer making a hole in one. Believing that he and Pumbaa are wasting their lives, Timon suggests that they should get rich by playing golf. Pumbaa agrees and the two friends pull out golf clubs.

Timon and Pumbaa are getting ready to play golf. However, they are shown to be very bad at the sport as they have trouble hitting the golf ball. They soon give up but then continue. Timon has a feeling that they are doing something wrong. Pumbaa at first thinks that they are doing well except that the golf clubs are difficult to hold with hooves until Timon makes him realize that they are suppose to hit the ball.

After Timon uses a giant missile to move the ball, the missile creates a giant crater, making the ball far away from the duo. Timon and Pumbaa suggest that they use a bigger ball and bigger clubs. As they try to hit the ball, they accidentally remove parts of the earth. An announcer states that will the earth being off balance, everyone will hurl into space.

Timon hires a golf instructor to tell them how they could save the earth. The golfer tells the duo that they should do so by replacing their divots, which are big chunks of grounds loose by poor golfing. Timon and Pumbaa use a rocket to float into space in order to put the grounds back on the earth.

After saving the world, Timon and Pumbaa realize that golf is not for them. They then decide to play baseball, but it turns out they're bad at it as well. 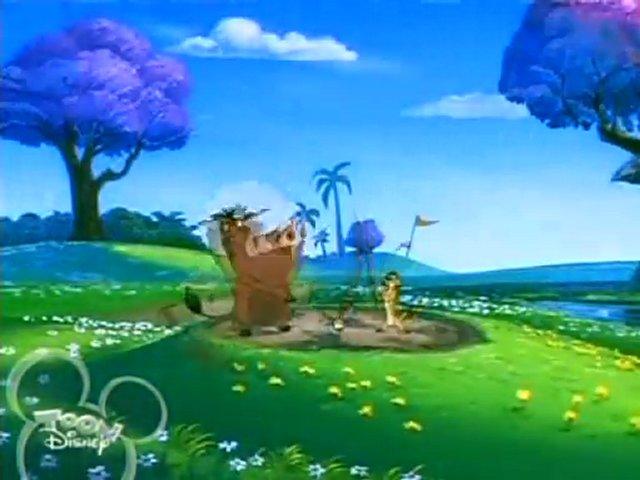 Whiff
The full episode of "Whiff"