"Werehog of London" is the second segment of the eleventh episode of Season 3 of The Lion King's Timon & Pumbaa. It aired on March 12, 1999, alongside "Hot Enough For Ya?".

"While in London, Timon becomes convinced that Pumbaa could be a werehog."[1]

While a woman, who is wearing a target, is on her way home from work in a dark and dangerous street, she gets stalked by a monster known as a "werehog." The scene then cuts to Timon and Pumbaa, who are resting in a park. The two wake up and find themselves in London, England for vacation.

Suddenly, a strange man, who is known as Creepy Fortune Teller, appears and warns Timon and Pumbaa about the werehog, telling them that it travels through the light of the full moon and can terrorize them and that no one can escape its curse. When he disappears, Pumbaa becomes a little afraid, but Timon claims that he will not let the man ruin his up mood. Timon and Pumbaa then visit a souvenir boutique, only to find out that the owner sells children who have been transformed into cobs. Creeped out by what he sees, Timon decides to leave, but then runs into Creepy Fortune Teller again.

Creepy Fortune Teller tells Timon to not trust anyone, not even Pumbaa, claiming that he might be the werehog. At first, Timon doesn't believe the man until Pumbaa tells him that he is going to take a nap since he didn't get much sleep during the night and that he had a strange dream that he was wondering in the streets hungry for human flesh. This makes Timon believe that Creepy Fortune Teller might be right about Pumbaa.

While Pumbaa is taking his nap, Timon tries to think of how he can tell whether or not Pumbaa is the werehog. He takes out a book from his suitcase and reads a page about werehogs, which states that werehog attacks have been documented for centuries and once it tastes blood, it always goes back for more. Timon then recalls the time Pumbaa started bleeding after accidentally stepping on a thorny coconut while he and Timon were traipsing the jungle. The meerkat then wonders how he can cure his friend.

Later that night, while a couple enjoys their midnight walk, they get attacked by the werehog. Overhearing the couple screaming, Timon wakes up and finds Pumbaa missing, realizing that his friend is the werehog and went to eat human flesh. Creepy Fortune Teller appears and gives Timon his card to his house of exorcism in order to cure Pumbaa.

When Timon and Pumbaa arrive to Creepy Fortune Teller's house of exorcism (which Pumbaa got convinced by Timon to be Buckingham Palace), they are introduced to his assistant, Shegor. Creepy Fortune Teller cures Pumbaa by making the warthog drink a potion. The man then suggests that Timon waits until nighttime to be sure if Pumbaa is cured from the curse, but also tells the meerkat that legend says that on the third night of the full moon, the werehog kills and eats the one he likes best, much to Timon's extreme fear.

Timon enters an abandoned apartment and hides in the bathroom, only for Pumbaa to find him. He disguises himself as Pumbaa's mother to scold him for trying to kill his friend. Pumbaa, however, realizes that it's Timon and he also realizes that Timon has been thinking that he was a werehog, to which the meerkat nervously denies.

Suddenly, the werehog's shadow appears. When Timon and Pumbaa scream in fear, it turns out to be a shadow of a mouse about to eat his cheese, with the mouse complaining about everyone being afraid of his shadow. Timon then apologizes to Pumbaa for believing that he is a werehog and promises that to never again mistake him for a bloodthirsty killer. The meerkat then states that if he and Pumbaa were really in a horror film, this would be the perfect time something scary would happen to set up the sequel, which it does as the screen fades out and a chainsaw is heard in the background. 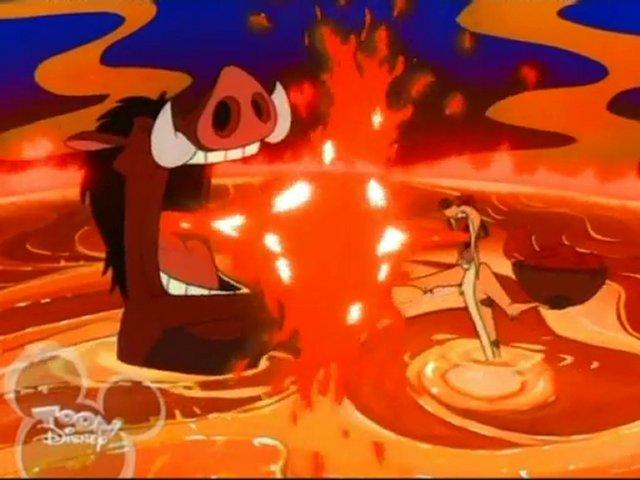