"Washington Applesauce" is the second segment of the twelfth episode of Season 2 of The Lion King's Timon & Pumbaa. It aired on October 14, 1996 on the syndicated Disney Afternoon block, alongside "Forbidden Pumbaa".

"Timon and Pumbaa are contracted to capture a monstrous apple-eating worm, so that Apple Valley's Apple Festival can go on as planned."[1]

At an apple-growing town called Apple Valley, a man picks up apples from a tree and puts them in a basket, but then a worm sees the apples and eats everyone of them. Then, the worm eats the man's overalls and then eats the apples in his boxers, causing the man to shout in fear.

The scene switches to an annual apple festival. At the City Hall of the festival, the town residents are ranting about the worm threatening their city. Since the worm on the loose, the Mayor suggests that he should cancel the apple festival, much to the people's anger. Then, Timon and Pumbaa show up, telling the people that they are going to eat the worm and that the people can keep the Bazillion dollar reward they were about to give to anyone who catches the worm.

Timon makes Pumbaa dress like an apple and stacks other apples on the ground, with Pumbaa doubting that it's a good idea and the worm might eat him. The worm eats the apples on the ground and then takes Pumbaa. Timon takes out a rope from his suitcase to catch his friend, but he gets dragged all over Apple Valley. When the attempt to catch the worm fails, Timon comes up with another plan.

Timon and Pumbaa use a worm finding device and go on a search for the insect. The two friends come across a boat that got chewed by the worm. Several eaten apples suddenly fall on Timon. Timon and Pumbaa then find the worm's giant hole. Timon goes in the hole to look for the worm while Pumbaa waits outside. While looking for the worm in the hole, Timon finds more eaten apples. Meanwhile, a device next to Pumbaa rings, implying that the worm is somewhere close to Timon and the warthog tries to warn his friend, but he can't hear him. Pumbaa, therefore, goes in the hole and finds Timon, whom he shows the signal to. Timon and Pumbaa find the worm, who has become giant, and get chased by it.

Timon and Pumbaa get out of the hole and hide behind a rock, but the worm sees them and eats them. Inside the worm's mouth, the two friends are getting ready to eat the worm. Timon and Pumbaa, who are now really obese, go back to the City Hall and tell the people that they save the apple festival. The festival, however, gets destroyed by Timon and Pumbaa's strong walks. The residents are angered by this and chase the two friends. 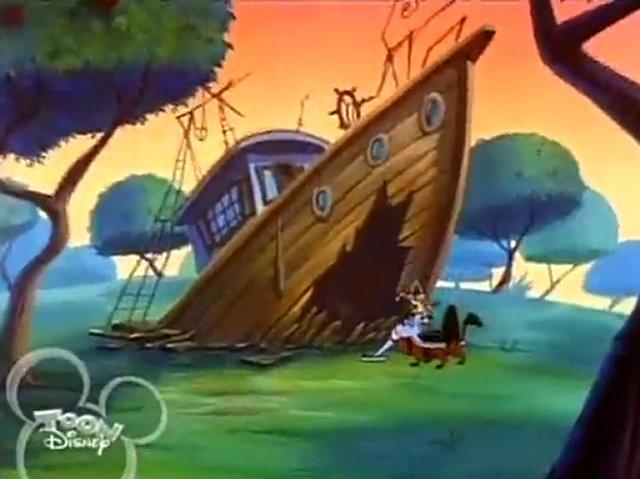