"War Hogs" is the first segment of the twenty-sixth episode of Season 3 of The Lion King's Timon & Pumbaa. It aired on June 25, 1999, alongside "The Big No Sleep".

"Timon and Pumbaa join a warthog army just as a war is starting."[1]

Timon and Pumbaa see that the ad represents an upcoming warthog army. The two friends decide to join the army, but then Pumbaa realizes that Timon can’t do so since he is not a warthog. So Timon puts on a fake warthog snout.

Timon and Pumbaa now find themselves involved in the war, with Pumbaa finding some bugs in the mud, much to their delight. The sergeant makes the duo place a flag at the top of a hill, which proves to be difficult as there are bombs exploding around it. So Timon and Pumbaa try to find a way out of the war, with their first attempt being to desert. The warthog army then goes across the globe. The scene then cuts to Timon and Pumbaa at a swimming pool talking to two women. Then the sergeant shows up to make the two friends resume in their job.

Timon and Pumbaa find another way to get out of the army, which is to cover themselves in ketchup to pretend that it’s blood so that it would seem like they got injured. Timon and Pumbaa are now being taken care of by a warthog nurse. The sergeant then appears to make Timon and Pumbaa continue their mission.

Back in the war, Pumbaa measures how far he and Timon have gone and how many more miles they have to go. The two then get an idea. They find themselves in a prison-like area enjoying their bugs while watching TV. Timon and Pumbaa then hear a sudden bomb explode, making the sergeant show up and rescue the duo.

The meerkats and warthogs then see Timon and Pumbaa together, making them realize that the two species can be friends. They then decide to end the war and live together in piece. 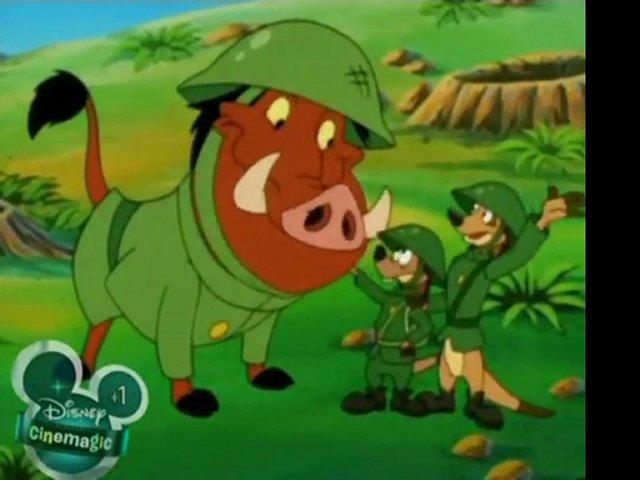