"Visiting Pig-nitaries" is the first segment of the sixth episode of Season 3 of The Lion King's Timon & Pumbaa. It aired on February 5, 1999, along with "The Truth About Kats and Hogs".

"While visiting Etiquettica, Timon and Pumbaa are mistaken for visiting dignitaries."[1]

Timon and Pumbaa arrive at Etiquettica by plane, with Timon getting sick of himself and Pumbaa being treated as 17th class as they had to ride on one of the plane's tires. The two friends then run into an assistant of the Empress, who mistakes them for visiting dignitaries. Timon and Pumbaa are at first confused, but when the assistant explains what dignitaries are, Timon decides to take advantage of his mistake and makes Pumbaa do so as well.

Timon, Pumbaa, and the assistant are riding in a limousine, with Pumbaa complaining about his hunger. Timon tells his friend that they will get treated like kings as long as they keep the assistant thinking they're visiting dignitaries. Pumbaa then sees a swarm of bugs flying towards him and has them stuffed in his mouth, much to the assistant's disgust. Timon then removes the bugs from Pumbaa's mouth and covers it up by saying that it's a custom in their country.

The assistant takes Timon and Pumbaa to the Imperial Museum of Etiquettica. He guides them to see a picture of their first emperor, Jean-Claude Fluggin. When he wipes the picture, Pumbaa smells the dust and uses the priceless copy of Etiquettica's constitution as a tissue to sneeze on. The warthog wipes the constitution on an armor, causing it to make the other armors fall and ruin the picture.

Timon and Pumbaa are now about to meet the Empress of Etiquettica. Pumbaa is about to belch, but Timon tells him to hold it in. When it is Timon's turn to greet the Empress, the meerkat imagines her as a beautiful young woman and bows before her, but when he opens his eyes, he sees that the Empress is an unattractive middle-aged woman. Pumbaa tries hard to hold in his belch, but ends up making a loud and strong burp in the Empress' face. Timon tells her that it's a custom in their country.

Timon, Pumbaa, the assistant, and the Empress are now having a fancy dinner. A winged bug gets into Pumbaa's soup and the warthog goes after it, accidentally and recklessly ruining the dinner. After the assistant calls Pumbaa a peasant, Timon tells him and the Empress the truth, thus Timon and Pumbaa get banned from the building. Timon apologizes to Pumbaa for ruining their vacation by pretending to be something he's not, but Pumbaa tells him that no matter what he pretends to be, he is really his Bestest Best Friend. The duo then chases the winged bug Pumbaa was after during the dinner. 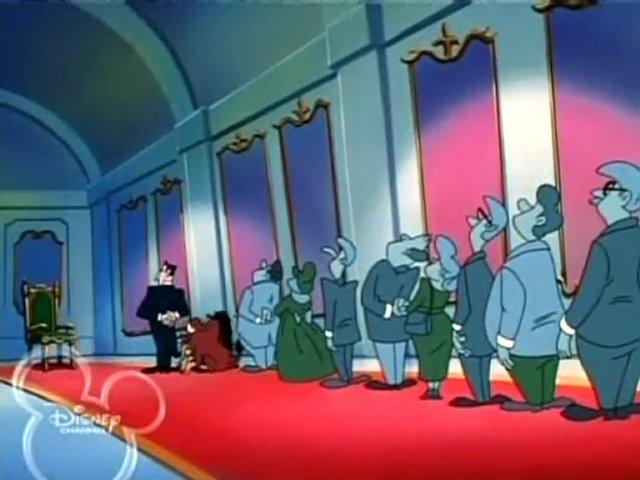