"Pumbaa finds an adorable black baby panther kitten and must keep its existence a secret from Timon."[1]

Ned starts his Good Luck Club, which lost most of its members, with the only remaining member being a zebra. The zebra tells Ned that the reason no one ever shows up to his club anymore is that he brought an unlucky jar. When Ned states that the jar is not that unlucky, the zebra reminds the elephant of the misfortunes that happened to Goldie, a smiling crocodile who caught an unlucky disease that caused all his teeth to fall out, leaving him broke and having to move back with his mother, and Horatio, a happy and jolly hippo who took weight gain pills which turn out to be weight loss pills. The zebra then loses most of his stripes and flees, resulting in Ned agreeing with him.

Meanwhile, while Pumbaa is about to fetch himself some bugs, he finds a lost and lonely panther kitten. The warthog takes the panther to Timon to surprise his friend. But Timon, who is reading a book on bad luck, tells Pumbaa that having a black cat cross your path is unlucky. When Pumbaa questions his friend why is suddenly superstitious, Timon tells him that earlier that day, he talked to Ned, telling him that he wanted to join his Good Luck Club. Ned told the meerkat that in order to become a member, he had to protect the unlucky jar, which he tricked him into telling him that it was lucky. Therefore, Timon has to follow Ned.

Timon protects the jar by placing it on soft, comfy pillows. He then asks Pumbaa what the surprise was and since Timon told him about black cats being bad luck, the warthog replies by saying that he bought nothing, knowing that he has to hide the panther cub from his friend. Timon trips on the leaf the panther kitten is hiding in and the book of bad luck hits the lucky jar and Timon quickly catches it.

The panther cub, now out of the leaf, chases a butterfly and then blows a whistle, which makes a marching band show up. Timon tries to keep the lucky jar from being stepped on by the members. After the marching band leaves, the panther cub chases a cricket and accidentally pushes a button from a secret missile silo. The lucky jar gets on the top of the missile and Timon gets on the craft and grabs the jar. After the missile blows up, Timon falls down and Pumbaa uses the meerkat's skin that came off as Timon got on the rocket to catch him. Timon and Pumbaa fall underground, with the lucky jar safe in Timon's hands.

Timon now tries to figure out what's causing the unlucky things that just happened while Pumbaa hides the panther cub in his mouth and later behind his back. Pumbaa then gives Timon an idea about good luck, which that he could protect the jar by surrounding it by various lucky items.

Timon puts the jar over holly berries, surrounds the berries with lucky horseshoes, brings in a rabbit because of its lucky feet, and he puts leaf clovers on himself and Pumbaa as well as spraying themselves with crocodile tears. Timon then gets on a ladder and pours lucky milk in the jar. Wanting the milk, the panther cub gets on the ladder, climbs into the jar, and knocks it over. Timon realizes what's going on and quickly tries to catch the lucky jar, but the jar breaks. The meerkat sees the panther cub and gets angry at Pumbaa for bringing it home and hiding it behind his back. Timon gets an idea to trick Ned into thinking that the lucky jar is unharmed and then tells Pumbaa to bring the panther cub back where he found it.

When Timon brings Ned the jar, with the pieces glued together to fool the elephant, Ned is not convinced and breaks it with his trunk. The elephant makes fun of Timon's unluckiness, laughs at him, and is about to humiliate the meerkat by telling the whole jungle about him.

The panther cub shows up and scares Ned, making the elephant fall off a canyon but land safely in the ravine. Not long after Ned is proud to be away from the unlucky jar, he gets surrounded and eaten by piranhas. After Timon and Pumbaa witness Ned's death, Timon praises the panther cub for saving him from major humiliation, realizing that the cub is not such bad luck after all. The cub soon becomes Timon and Pumbaa's new friend. 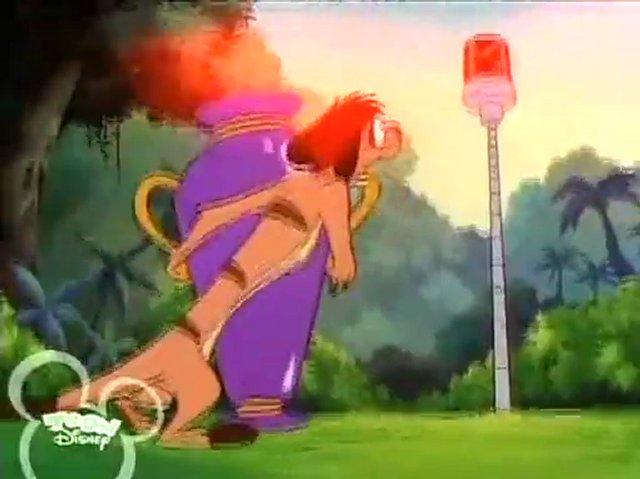 Retrieved from "https://lionking.fandom.com/wiki/Unlucky_in_Lesotho?oldid=304712"
Community content is available under CC-BY-SA unless otherwise noted.