"Undercover Kinyonga" is the twentieth episode of Season 2 of The Lion Guard. It aired on April 5, 2018.[1]

The Lion Guard meets a color-changing chameleon who is willing to spy on Scar in the Outlands.[2]

The Lion Guard waits on the border of the Outlands and the Pride Lands, when Ono suddenly appears, being chased by Mwoga and Mzingo. The vultures fail to catch him, and Ono lands safely among his teammates, reporting that Janja and his clan are paying a visit to Scar.

Just then, Thurston's frightened brays attract the Lion Guard's attention, and the team approaches him and his herd, asking what the problem is. Thurston reports that a nearby rock has been talking to him, though the team has its doubts. However, Twiga soon appears with a similar claim about a tree. Kion calms the animals, promising to figure out what's going on.

The Lion Guard investigates Twiga's tree, where Ono feels a mysterious creature crawl over his talons. A chameleon briefly appears before the team, then races away, blending in with her surroundings as she goes. The team takes chase, and Ono is able to spot her with his keen sight. The chameleon then reveals herself to them, as she realizes that they are the Lion Guard, and introduces herself as Kinyonga. She then sings "Now You See Me, Now You Don't", in which she explains her camouflage abilities to the team.

After parting ways with Kinyonga, Ono apologizes for having been spotted by the vultures. Kinyonga overhears the dilemma and offers to sneak into the Outlands and spy on its inhabitants for the Guard. Kion is hesitant to place her in so much danger, but Kinyonga insists that she has ventured undetected in the Outlands before, to which Kion reluctantly agrees to her plan.

Kinyonga ventures into the Outlands, sneaking past the vultures, as well as Cheezi and Chungu, to the volcano. There, she overhears Scar ordering Janja to block up the river at Hakuna Matata Falls in order to deplete the Pride Lands of an important water source.

Just then, Shupavu notices Kinyonga's shadow on the wall and alerts Scar to the intruder. Ushari orders the skinks to pursue her, and Kinyonga races away with Shupavu and her minions hot on her tail.

Meanwhile, the Lion Guard worries over what is keeping Kinyonga. As they wait, Bunga jumps out of the underbrush, decked in camouflage. Kion orders Ono to look for Kinyonga, and Ono spots her being pursued by the skinks. He reports back to the team, and Bunga suggests storming the Outlands and taking on any enemies who try to stop them. Kion worries that a battle will not save Kinyonga and declares that he has an idea as to how they can enter the Outlands unseen.

Back in the Outlands, Kinyonga finds herself cornered by skinks in a dead-end. Just then, Shupavu hears a mysterious voice and turns to find that the Lion Guard has snuck up on the skinks by using foliage and mud to conceal themselves. The skinks bank a hasty retreat, and Kinyonga expresses admiration for the Lion Guard's tactic. She then explains Scar's plan to them, and the team resolves to return to the Pride Lands to foil the plot.

Come nighttime, the hyenas attempt to block up the river, but the Lion Guard once more camouflages themselves and launches a surprise attack. As the hyenas retreat, Cheezi wonders how the Lion Guard had managed to learn such a trick, to which Kinyonga suddenly appears and takes the credit. Her unexpected appearance startles the hyenas, who fall into the river and careen over the edge of Hakuna Matata Falls.

Once at the bottom, Janja decides to lie to Scar, claiming to have been scared away by rocks and foliage instead of the Lion Guard. Kion orders the clan to leave the area, and they scuttle away. He turns to thank Kinyonga, but the chameleon has already disappeared.

The next morning, Ono reports that Kinyonga is still missing. At that moment, the Lion Guard notices Thurston speaking to a rock and figures that it must be Kinyonga at work. They approach Kinyonga and question her to why she had disappeared, to which she expresses guilt over scaring Janja and his clan into the river. Bunga assures her that it doesn't matter if the hyenas get spooked, and she vows to never scare anyone again. However, Thurston is frightened by her appearance, and he and his herd flee from the rock. The Lion Guard quickly takes chase, while Kinyonga blends into the grass. 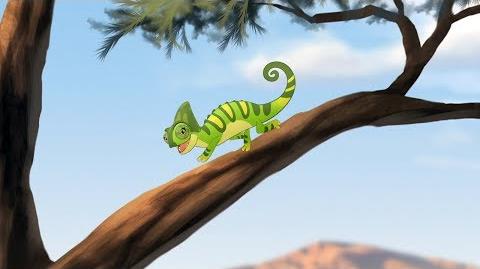 The Lion Guard Am I here or am I here song (with lyrics) Undercover Kinyonga
The "Now You See Me, Now You Don't" musical sequence 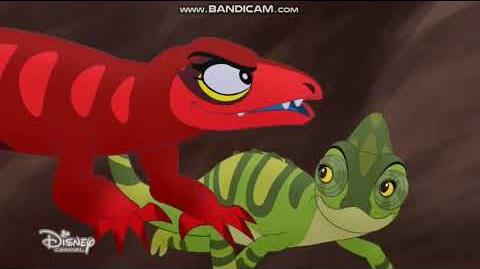 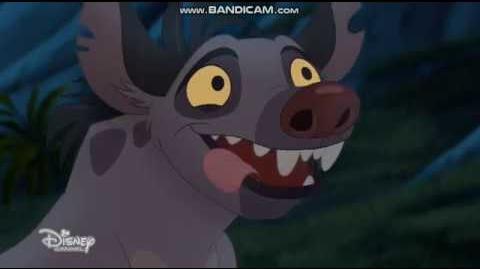 Retrieved from "https://lionking.fandom.com/wiki/Undercover_Kinyonga?oldid=292561"
Community content is available under CC-BY-SA unless otherwise noted.