"Pumbaa gets it into his head to reinvent himself as a pachyderm."[1]

Timon draws Pumbaa's attention to Ned the Elephant, a prideful pachyderm, and points out all the benefits an elephant enjoys over every other animal, including a trunk for showers, birds that ride on his back, and the utility of long tusks. Pumbaa begins contemplating becoming an elephant and the next morning, he excitedly asks Timon for help in transforming himself into an elephant. Because Pumbaa's reason to change is to be more popular, Timon jumps on the opportunity.

When they arrive, Ned and his two hippo friends point and laugh at the "Pumbaaphant." They laugh so hard that, as they're walking away, they plummet over a cliff, making it up to Pumbaa to rescue them. Barely hanging on, Ned still tries to make fun of Pumbaa. Eventually he grabs onto Pumbaa's nose and is towed up. Ned gets a change of heart and offers Pumbaa an honorary spot in his clique. However, Pumbaa refuses, saying that he is proud to be exactly who he is: a warthog. 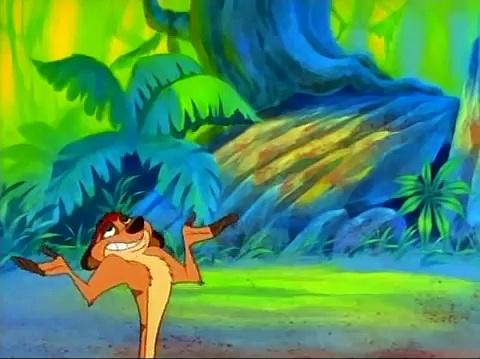 Retrieved from "https://lionking.fandom.com/wiki/Uganda_Be_an_Elephant?oldid=296518"
Community content is available under CC-BY-SA unless otherwise noted.