Twiga's herd is a group of giraffes who live in the Pride Lands. They are led by Twiga.

Twiga's herd watches the mashindano between Makuu and Pua. Later, Twiga's herd gets forced into Nyani Grove due to Makuu upsetting the kingdom's habitats. The issue is eventually resolved, with the herd returning to Acacia Grove.

Twiga's herd can be seen during the "My Own Way" musical sequence.

Twiga and two other giraffes appear during the "Life in the Pride Lands" musical sequence.

Zazu informs the Lion Guard that a rock slide has separated the giraffes from their watering hole. The team rushes to the site of the accident, where several giraffes begin to laugh at Ono for losing his crest feathers. After some conference with his team, Beshte pushes the rocks out of the way, allowing Twiga's herd to access their watering hole once again.

Twiga's herd gets in an argument with Vuruga Vuruga's herd over Big Springs due to a severe drought. Kion defuses the situation. Later, Twiga's herd travels to Dhahabu Grove, where they can access drinking water.

"The Wisdom of Kongwe"

Two members of the herd appear during the musical sequence "The Faster I Go".

After Ma Tembo's herd is ousted from Kilio Valley from a fire, Kion requests that the herd temporarily stay with Twiga and her giraffes. At first, Twiga is receptive to the elephants staying in her home, but once they start eating entire branches off of the trees, she appeals to Kion to take them elsewhere.

The herd go to drink from the Watering Hole, but they are frightened away by the arrival of Shujaa. Kion sends Beshte and Ono to calm the giraffes.

The herd is present when Dhahabu arrives at Pride Rock to discuss a water treaty with Simba.

At Mizimu Grove, Rafiki and Simba announce Makini's mpando mpaya. In the midst of the celebration, the Army of Scar attacks, and the Pride Landers rise up to defend themselves. The battle pauses when Scar appears in the flames and threatens to overtake the entirety of the Pride Lands. Frightened by Scar's unexpected appearance, the remaining Pride Landers, including Twiga and her herd, flee Mizimu Grove.

At Pride Rock, Kion implores Twiga and her herd to follow him to Mizimu Grove before they decide to leave the kingdom. The herds follow Kion to Pride Rock, where Makini's baobab tree seed has survived the fire. This inspires the Pride Landers to remain in the kingdom and work together to defeat Scar.

When fire sticks begin raining down from the sky, the Lion Guard rushes to protect Twiga and her herd.

The herd bids the Lion Guard farewell as they depart the Pride Lands for the Tree of Life.

The herd attends Kion's wedding to Rani at the Tree of Life. 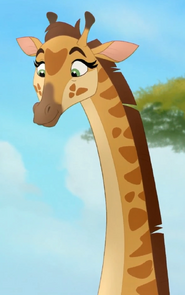 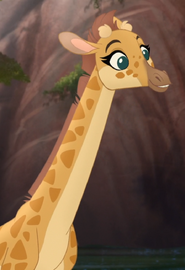 Shingo
Add a photo to this gallery
Retrieved from "https://lionking.fandom.com/wiki/Twiga%27s_herd?oldid=292339"
Community content is available under CC-BY-SA unless otherwise noted.