Born in Lesotho as Tsidii, she became a member of the newly formed top South African Trio named "Shadiii" with Anneline Malebo and Faith Kekana. Even before moving to the United States, Tsidii became a rising vocalist through her concert performances, festivals, international tours, and recordings in South Africa. She also collaborated with her recordings with well-known established singers such as Sting, Elton John, Madonna, Harry Belafonte, Ladysmith Black Mambazo, and many others.[1]

Because of this, this caught the attention of The Lion King stage director Julie Taymor who cast her as the mandrill, Rafiki, as Taymor changed Rafiki's gender to a female as she believed that there was generally no leading female character in the original film.[2] Also, Tsidii was the only lead performer to also involved in the creative process of the musical as she composed the song, "Rafiki Mourns", which was included in the Original Broadway Cast Recording CD.[1] Her performance was praised by theater critics, including critic Frank Langford who called her performance "one of the most impressive debut in Broadway history". For her performance, Tsidii won the Drama Desk Award, Drama League Award and Outer Critics Circle Award for Outstanding Featured Actress in a Musical, and garnered a Tony Award nomination as well. By then, Tsidii won the highest number of top industry awards than any performer in the musical, and was the only lead performer in the original cast born in Africa.

Tsidii later expanded into television and movies by having supporting roles in two Stephen King made-for-television movies, Rose Red and The Diary Of Ellen Rimbauer as Sukeena, and Law And Order. Her television special, "Caught In The Act", premiered on WGBY, and won the Iris Award for best local program.[1] 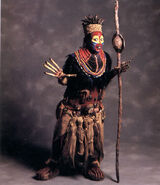