"Timon and Pumbaa are mistaken for babies and taken in by a kind Mama Gorilla."[1]

Timon and Pumbaa are running away from a hunter named Congo Quint, and they end up in baby clothes a rabbit was hanging up. When Quint gets them, a female gorilla appears, saves Timon and Pumbaa and takes them home. She then decides that they are now her babies and that she's going to take care of them.

Pumbaa is not comfortable with the idea and decides to tell the female gorilla the truth. At the mention of "take advantage of maternal instincts for personal safety and comfort", she gets really mad and chases Timon and Pumbaa, just like Quint at the beginning of the episode. They end up in a dead end and the gorillas surround them. All of a sudden, a net falls down and traps the gorillas and Quint appears with what looks like a gun. He points it to Timon and Pumbaa claiming that he finally got them and when he pulls the trigger, the gun takes a picture, revealing that Congo Quint is actually a wildlife photographer and the gun is actually a camera.

Quint claims that he's going to be famous with that picture and that all magazines will want it in their cover. When Quint is going away, the female gorilla grabs him from the net and starts to hit him on the ground. Timon has the idea to take pictures of that scene so he can sell them to the magazines too. 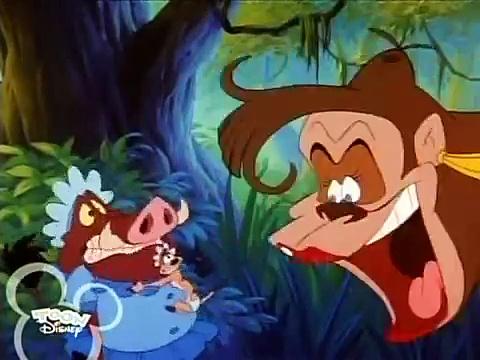 Retrieved from "https://lionking.fandom.com/wiki/Truth_or_Zaire?oldid=296546"
Community content is available under CC-BY-SA unless otherwise noted.