To Be Bee or Not To Be Bee

"To Be Bee or Not To Be Bee" is the second segment of the first episode of Season 3 of The Lion King's Timon & Pumbaa. It aired on January 1, 1999, along with "Whiff".

"While in the Valley of Big Bugs, the duo are taken to a bee colony."[1]

Timon and Pumbaa explore the darkest and deepest part of the jungle, searching for the Valley of Big Bugs. The two friends then see two giant bugs running towards them. They then get captured by a giant praying mantis, who is about to devour them until they get rescued by a horde of large bees.

The bees take Timon and Pumbaa to their colony, where it is shown that they are toiling for the Queen. Queen Bee's drones show her that their productivity is up 15% and their profits are 74%. Unsatisfied by the cost, Queen Bee orders them to take a memo to the workers by running a million copies and distributing it by noon. Buzz, the first class worker of the colony, brings Timon and Pumbaa to Queen Bee, telling her that he and the other bees found them lurking on their borders. Queen Bee demands to have Timon and Pumbaa fed to the larvae, but Buzz suggests that they should be put to work as it would be more cost efficient. The drones agree, telling the Queen that it would increase the percentage of the working activities. Queen Bee reluctantly agrees and demands Buzz to train Timon and Pumbaa. While Timon and Pumbaa thank Buzz for saving their lives twice, the bee suggests that they could repay him by being model workers in order to impress Queen Bee.

Buzz makes Timon and Pumbaa carry buckets of honey to the bee hive. The bee then finds the pals relaxing in their buckets. This makes the buckets too heavy for Buzz to carry and he accidentally knocks another bee, causing all the other bees to be knocked as well. The bees accidentally make a mess at the bee colony, making Queen Bee report Buzz to her office.

Buzz just got fired as first class worker of the colony, much to his lament. Timon and Pumbaa suggest that he, as well as the other bees, should relax and they teach him about Hakuna Matata. At first, Buzz doesn't find this to be a good idea since he spent his whole life working for Queen Bee, but then he and all the other bees start to go along with living a Hakuna Matata life. Queen Bee sees what's going on and forces the bees to get back to work, but Buzz fights back, stating that there is more to life than work and Queen Bee gets kicked out of the colony.

Timon and Pumbaa become the kings of the colony and they let the bees enjoy their new Hakuna Matata life. However, things go wrong at the bee hive and Timon, Pumbaa, and Buzz realize that Hakuna Matata doesn't work for bees. Therefore, Buzz begs Queen Bee to return to the hive. Queen Bee forgives him and tells him that she will return only if the bees are loyal to her, take cost of their health benefits, and have Timon and Pumbaa banished from their colony.

Timon and Pumbaa are put in a net so that they could fly far away from their territory after Buzz cuts the rope with an axe. When this plan succeeds, the bees get back to work. Meanwhile, Timon and Pumbaa are flying in the air until they land in another part of their jungle. 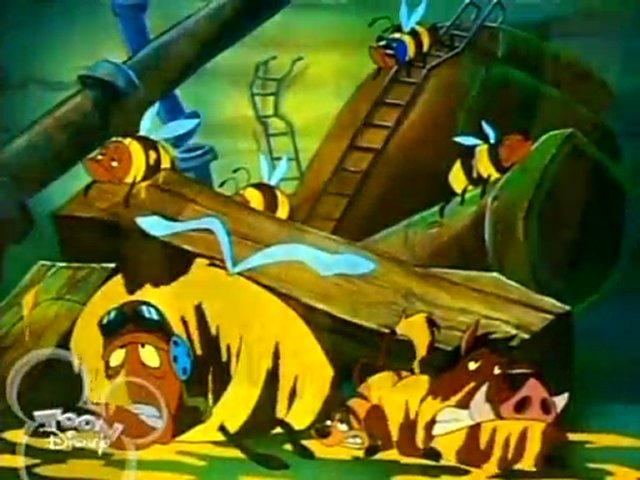