"Timoncchio" is the first segment of the thirty-fourth episode of Season 3 of The Lion King's Timon & Pumbaa. It aired on August 20, 1999, alongside "Ghost Boosters".

"Rafiki curses Timon so that his tail will grow everytime he lies."[1]

Timon and Pumbaa are arguing over whether Pumbaa is jealous of Timon’s success or not. Timon tells Rafiki that he beat Pumbaa at a bug-catching contest and shows him a trophy. The meerkat then claims that Pumbaa has a problem with him being the winner, which the warthog replies that his real problem is his friend bragging about winning.

As Timon continues to brag, Pumbaa challenges Timon to see if he can spend the whole day without bragging and the meerkat says that if he does so, his tail will grow. While the two friends go fetch some bugs, Rafiki puts a spell on Timon’s tail so that it will really grow every time he brags.

Later, Timon starts to brag about himself and as a result, his tail grows longer. When he sees this, Rafiki appears in a form of a cricket. The baboon tells the meerkat that he will lose the challenge if Pumbaa sees his tail being longer than it normally is. Therefore, Timon has to try to hide it.

When Pumbaa shows up and eats Rafiki as he mistakes him for a real cricket, Timon pretends that his tail is spaghetti, which the warthog is interested in eating with Meat Bugs. But Timon says that he’s eating it for a contest and he soon starts bragging again, causing his tail to grow again. Pumbaa states that Timon is bragging, which the meerkat denies.

While he and Pumbaa are taking a walk, Timon continues to brag, making his grow more and more. When Rafiki reappears, he sees that Timon turned his tail into a giant ball. Timon’s tail starts rolling down, causing the meerkat to run from it and while he does so, he continues to brag, resulting his tail to grow even longer.

After Timon runs into Pumbaa again, his bragging causes his tail to grow again. When Pumbaa leaves, Rafiki decides that Timon is now on his own. Seeing how big his tail got, Timon asks Pumbaa for his help, which the warthog replies by claiming that he has been bragging. He eventually sees that Timon’s tail has grown. Timon’s tail starts to bounce and float into outer space, causing Timon to rise. In order to prevent going to space, the meerkat holds on to Pumbaa’s tusks while Pumbaa hangs on to a tree. Rafiki appears and tells Timon to be honest with himself. When Timon apologizes and confesses, Rafiki turns the meerkat’s tail back to its normal size.

When the conflict is over, Pumbaa realizes that the cricket is after all Rafiki. Meanwhile, Timon learns his lesson and offers his trophy to Pumbaa, telling him that while he’s second place as a bug catcher, he is first place as his friend. When Pumbaa accepts the trophy and is going to catch some bugs with his friend, Rafiki tells Timon that they can put everything that happened that day behind them. 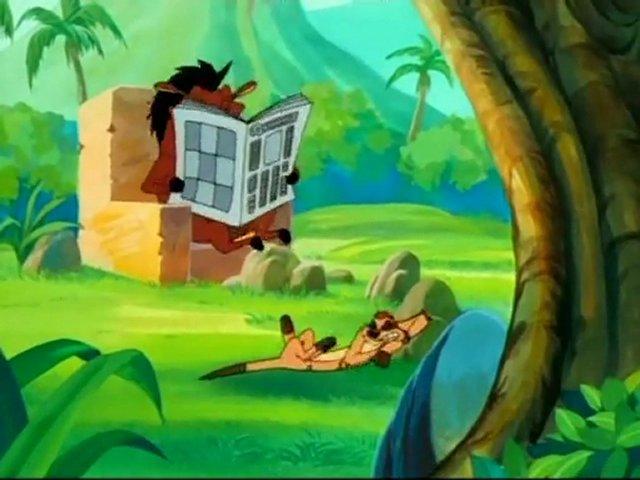