In the Wild West, an outlaw gang led by Cisco Pig, a humanoid pig, are about to rob a train. Cisco Pig goes to the train track to try to stop the train, but the train passes him.

Cisco Pig uses two long sticks to try to stop the train and rob it, but the train passes him again. For the third attempt, the criminal ties himself onto a brick wall, but the train runs into him and and he is presumed dead. His gang then walks off.

Meanwhile, Timon and Pumbaa enter a western town, with Timon talking in a western accent. The two try to greet the residents of the old west, but everyone mistakes Pumbaa for Cisco Pig, causing them to run away from them. Timon and Pumbaa sense that there is something scary going on and they hide in a bank. When Timon says the words "hold up," the people at the bank run off and the cashier gives them all his money. Cisco Pig's gang enters the bank to rob it, but the cashier tells them that he already gave all his money to Timon and Pumbaa, much to the gang's anger.

The outlaws chase Timon and Pumbaa for the money. After catching the two friends, they mistake Pumbaa for Cisco Pig. Delighted by "their leader" surviving the train, they dance before him, making Timon decide to take advantage of their mistake.

When Pumbaa states that robbing the train is illegal and that he refuses to do so, the outlaws then become suspicious, sensing that Pumbaa is not really their leader. They ask Pumbaa what Cisco Pig's favorite color is and Pumbaa replies by saying that it's blue, which is correct, but the bandits are still suspicious. They ask Pumbaa more questions about Cisco Pig. Pumbaa gets all of the answers correct until he is asked whether the outlaw's leader likes Timon or Pumbaa, to which the warthog incorrectly replies that it's the latter, making the bandits realize that he is not Cisco Pig.

Timon and Pumbaa escape the bandits by going fishing. But then, they get caught and run away, with the outlaws giving chase. The two friends then get surrounded by each one of the outlaws, who are about to kill them until they are stopped by Cisco Pig. After the outlaws escape, Timon and Pumbaa praise Cisco Pig for saving their lives. As Timon and Pumbaa dance before him, it turns out that Cisco Pig has a meerkat companion of his own and the two join in on the dance. 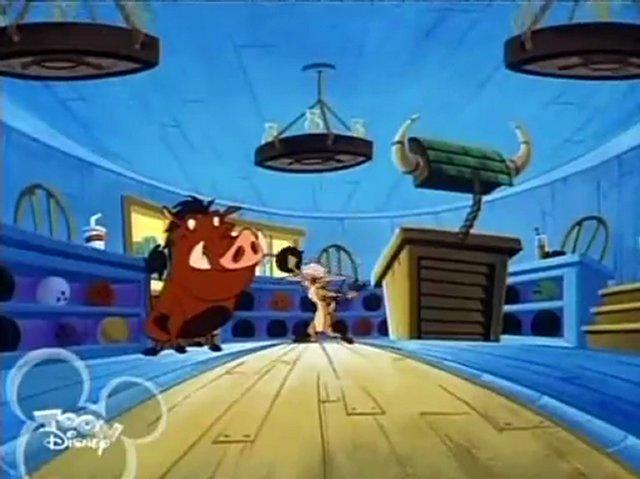 Retrieved from "https://lionking.fandom.com/wiki/Timon_on_the_Range?oldid=296581"
Community content is available under CC-BY-SA unless otherwise noted.