"The Lion Guard enlist the help of animals throughout the Pride Lands to surprise Timon and Pumbaa with a Christmas celebration."[2]

Rafiki the mandrill teaches his young apprentice, Makini, about the holidays of the Pride Lands. One such holiday intrigues Makini, and Rafiki explains that it is called "Christmas" and that it had been brought to the kingdom by two outsiders, Timon and Pumbaa. He then launches into the tale, explaining that Christmas always begins when a large star shines brightly in the sky, lasting throughout the day and night.

In the Pride Lands, Bunga assists his uncles, Timon and Pumbaa, in decorating an acacia tree with colored gourds. Timon attempts to place a star fruit at the top of the tree, but in doing so, he accidentally snaps a branch and begins to plummet toward the ground. Coincidentally, the Lion Guard arrives at the base of the tree, and Beshte catches the falling Timon on his back.

The Lion Guard then inquires about the oddly decorated tree, and Bunga explains that they are decorating their tree in honor of Christmastime. He claims that Timon and Pumbaa made up the holiday themselves, but the two correct him by saying that they had heard about it from other animals. They add that Christmas is about gift-giving and that a mysterious creature called Dandy Claws often leaves presents for the animals of the savanna. Bunga then sings "Christmas in the Pride Lands", in which he extols the unconventional holiday.

At the conclusion of the song, Timon weeps over Dandy Claws's continued absence, and Pumbaa explains that Dandy Claws only brings presents if animals perform a special song called "The Twelve Ways of Christmas" under the Christmas tree on Christmas morning. This only worsens Timon's mood, and not even Bunga and Pumbaa can cheer him up. Kion then calls for Bunga to join their patrol, and he does so unhappily.

While on patrol, Beshte notices Bunga's somber mood, and Bunga admits that he wishes he could help his uncles meet Dandy Claws for Christmas. Kion asserts that the Lion Guard can help make this happen, to which Bunga excitedly begins listing all the creatures and items that they must gather in order to properly perform the song. Though the list is vast, the team decides to split up in order to cover more ground and gather the necessary components quickly.

First, Beshte asks Ma Tembo to be involved. Though she is hesitant, Mtoto expresses interest in the performance, which ultimately persuades Ma Tembo to acquiesce to the Lion Guard's wishes.

Meanwhile, Kion speaks to his family about partaking in the Christmas celebration. Kion's mother, Nala, and sister, Kiara, quickly agree to the proceedings, but Kion's father, Simba, shows little interest in attending. With some persuasion from his mate and daughter, Simba eventually agrees, feeling that he owes it to Timon and Pumbaa for their help over the years.

Across the kingdom, Bunga and Ono gather bugs for the celebration. However, in the midst of their search, they sense Pumbaa's rapid approach, and Bunga hastily stuffs the gathered bugs into Ono's mouth. The two groups converge, and both act suspiciously, denying again and again that they are not planning a Christmas surprise for Timon. They then part ways, with Pumbaa straying toward a patch of white flowers, while Bunga and Ono continue their search for bugs. However, Ono accidentally swallows the bugs due to the long length in which they're in his mouth, much to Bunga's dismay.

In the meantime, Fuli tries to gather berries from a tree. Her failed efforts to reach them attract the attention of Uroho and his lackeys, Mwevi and Mwizi, who volunteer to fetch them for her. The baboons question Fuli as to why she needs the berries, and she explains that she is taking part in a great celebration. This reminds her that the song requires baboons to take part, and so she recruits the three to be involved in the show.

That night, the Lion Guard's animal recruits gather in a canyon to practice for the celebration. Simba questions Bunga as to what they need to do in order to practice for the show, but Bunga remains unsure as to where he should begin. Seeing the animals' confusion, Ono states that it is going to be a long night.

At sunrise, Kion expresses satisfaction with the animals' performances, but Bunga declares that they still need more practice. Ma Tembo points out that they will never be able to live up to Bunga's expectations, and Simba agrees. The group starts to break up and leave, but Kion calls them back. Simba questions his son as to why Christmas is so important, and Bunga explains that he wants to make up for his uncles' good deeds over the years. This convinces Simba to devote himself back to the cause, and he calls the others back to continue practice.

Later that day, Bunga hastens to Hakuna Matata Falls, where he awakens his uncles from slumber. At first, Timon is reluctant to wake up, as he does not wish to face another disappointing Christmas, but Bunga insists that the two follow him to the Christmas tree. Once there, Timon and Pumbaa are met by the Lion Guard, who sing "The Twelve Ways of Christmas" to them with their animal recruits.

After the song, Timon and Pumbaa weep with joy, and Timon thanks the gathered animals for making his Christmas vision come true. Despite Timon's joy, Bunga expresses sorrow that Dandy Claws had not appeared. However, Pumbaa appears dressed in white flowers and a gourd hat, and proclaims that he had hoped to make Timon's Christmas better by dressing up as Dandy Claws. He then admits that he had spent so much time assembling his costume that he'd been unable to buy Timon gifts.

Timon is quick to tell Pumbaa that he is not bothered by the lack of gifts, for the Pride Landers' song and Pumbaa's costume is more than enough of a present. He then reminds Pumbaa that the song had left them with many gifts, including berries and bugs, and the two conclude that this has been their best Christmas yet. The Lion Guard then decides to make Christmas an annual holiday in the Pride Lands, and the gathered Pride Landers yell, "Merry Christmas!"

Back in the present day, Makini comments that Christmas is a celebration of the Circle of Life, to which Rafiki agrees. He then taps the Christmas painting, bringing it to life, and the star at the top begins to twinkle. 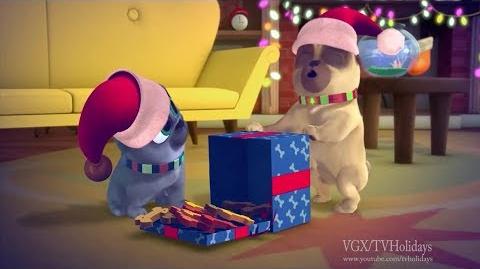 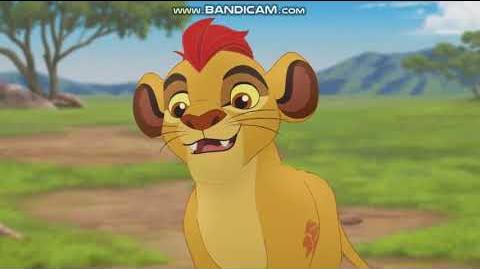 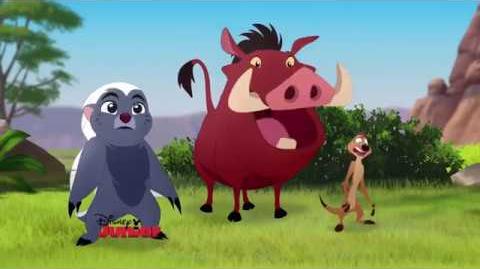 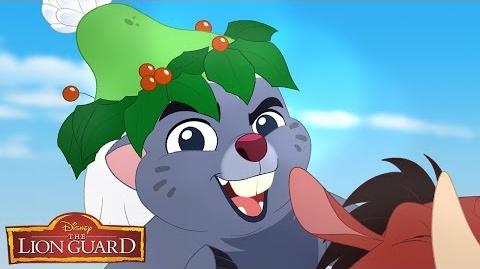 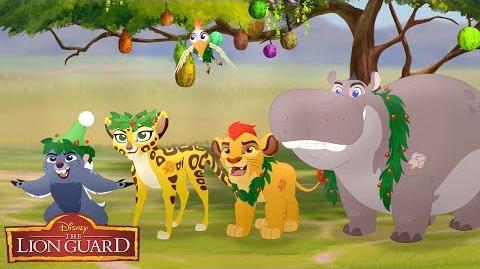 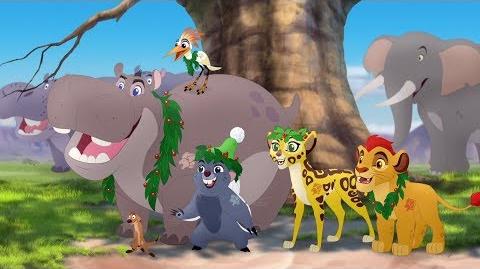 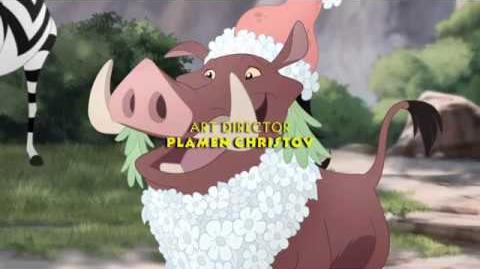 Retrieved from "https://lionking.fandom.com/wiki/Timon_and_Pumbaa%27s_Christmas?oldid=242275"
Community content is available under CC-BY-SA unless otherwise noted.