"Timon...Alone" is the second segment of the fourth episode of Season 3 of The Lion King's Timon & Pumbaa. It aired on January 22, 1999, alongside "Boo Hoo Bouquet".

"Timon wants to be alone to work on his novel."[1]

Timon decides to start a new life as a writer. He is wearing a blue hat and is using a feather as a pen. At first, Pumbaa believes that it is one of Timon’s schemes but then realizes it's the meerkat’s decisions. Timon explains to his friend that he has been a big talker his whole life and that he wants to write down all his thoughts, ideas, and intelligent observations by writing a book. Pumbaa suggests that he could write down his thoughts as well, but Timon states that he has to take his new path as a world's famous writer alone.

Pumbaa wants to watch Timon write and the meerkat allows him to do so, but only if he remains silent. Timon then comes up with a title for his best-selling book: Timon…Alone. When Timon starts writing about what he had from the day he was born, Pumbaa interrupts by telling his friend that he had a problem involving fleas. Annoyed by Pumbaa’s interruption, Timon decides to go to another part of the jungle alone so that he can stay concentrated, much to Pumbaa’s dismay.

While Timon wanders around the jungle, happy to finally be able to write his story without Pumbaa around, he decides to have a snack to help him concentrate. When he tries to catch a bug from inside a log, he runs into Pumbaa, who tells the meerkat that it was accident as he sniffed a bug while passing by. He then sees Timon walk away.

Pumbaa is now sitting by the watering hole, hoping that Timon will get over being alone. He then hears Timon’s voice approaching him and makes a quick attempt to hide, but Timon catches the warthog. Enraged, Timon asks Pumbaa what he can do to get away from him and angrily storms off. Pumbaa tells him that he will walk far away to Dismal Swamp where they will never run into each other.

Come nighttime, Timon continues writing his novel. As he progresses, he realizes how lonely he now is and decides to go find Pumbaa. While Timon arrives at Dismal Swamp and looks for Pumbaa, he criticizes himself for sending his friend away, saying that he’s nothing without the warthog and that Hakuna Matata is not the same when they're separated. The meerkat then gets stalked a cheetah, a bear, a crocodile, a snake, a wolf, a bat, and a T-rex. While Timon tries to sneak away from them, he drops his hat and feather on the ground. When the predators are about to eat Timon, Pumbaa comes to his friend’s rescue and scares away the animals.

Pumbaa shows Timon that he followed his trail, giving him back the hat and feather. The meerkat apologizes to Pumbaa for his earlier behavior and tells him that he can sometimes be a bigger Mook than the warthog. Timon then decides to give up being a writer and stay with Pumbaa, saying that nothing will ever come between them again.

Suddenly, an ostrich appears and finds one of its tail feathers, which Timon used as a pen, lying on the ground. When it retrieves it, Timon blames it on Pumbaa. This makes the ostrich attack the warthog while Timon states that he will probably hate himself for what he just did. 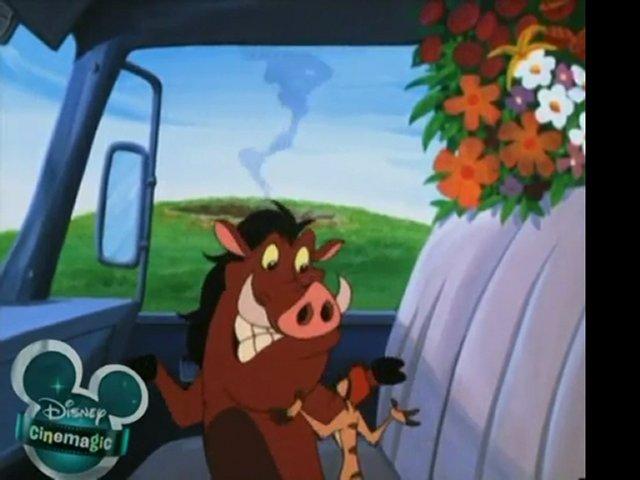