Timon and Pumbaa are relaxing under a shady jungle berry tree on a patch of peat moss in balmy 70 degree weather on a Wednesday afternoon. Timon eats a bug, but little does he know, the bug is poisonous according to the warning sign that says "Do NOT eat the bugs." After Pumbaa reads everything else written on the sign, Timon starts experiencing the symptoms mentioned on the sign. The meerkat then dies and goes to Meerkat Heaven.

A meerkat angel appears and shows Timon a big book about his life. The book shows that Timon has been naughty all his life as he has been calling someone a "mook." The angel is about to send Timon to Hell, but he gives Timon a second chance; he sends Timon back to Earth and tells him to be unselfish, meaning if Timon does one good deed, he will die and enter Meerkat Heaven, and Timon calls for a taxi. Timon wakes up and is now alive again and he plans on never doing any good deeds in order to live forever. Pumbaa tells the meerkat that he shall start a new life by helping others and do lots of good deeds, which makes Timon uncomfortable.

Timon and Pumbaa are now traipsing the the jungle and run into an ostrich, who is having trouble crossing the river. The ostrich asks Timon to help her cross the river, but Timon tells her that he's not a good swimmer. The ostrich then says that she will cross the river herself, but then falls on the waterfall. Timon and Pumbaa then see an oryx tied up to a tree. The oryx asks the two if they could untie him, but Timon says that he's a member of "The Do NOT Untie Knots Club," saying that if he unties the knots, he'll get banished from the "club" forever. Pumbaa says that he can't help because he has hooves. The oryx says that he'll have to untie the knots himself. Timon and Pumbaa then run into a bluebird who asks if they could help him get back up to his tree. Timon says that he has a bad back and Pumbaa can't help because he can't climb trees due to him having hooves. The bird then angrily says that he'll climb back up himself.

A couple of minutes later, Timon is standing by watching Pumbaa save some orphans at an orphanage that was burning down. Pumbaa then gets angry at Timon for not willing to help save the orphanage, and the warthog gets a feeling that the meerkat does not want to help others at all. Then Pumbaa catches himself on a tree root that throws him back and makes the warthog cling to a cliff, and Pumbaa is holding on to the ledge and begs Timon to help him. Timon says to himself that if he helps Pumbaa, it will be a good deed and he'll die and enter Meerkat Heaven, but if he doesn't help Pumbaa, the warthog will fall and die. Now the meerkat has to decide between his own life and his friend's life. Finally, Timon decides to save Pumbaa, which the warthog then calls a good deed. Timon passes out and dies again.

Timon is back in Meerkat Heaven and is about to enter. When the gate opens, he sees two female meerkats holding grubs. Timon is about to kiss one of them, but then he's back to Earth, and Pumbaa wakes his friend up. Pumbaa reveals to Timon that he's not dead because it's Tuesday and the bug he ate earlier is only poisonous if he eats it under a shady jungle berry tree on a patch of peat moss in balmy 70 degree weather on a Wednesday afternoon. This could mean that Timon never actually died; he just passed out and dreamed that he was in Heaven, and the symptoms he was experiencing could've just been his hallucinations, as he was so afraid of dying. Pumbaa then tells Timon that he won't be going to Meerkat Heaven for a long time. 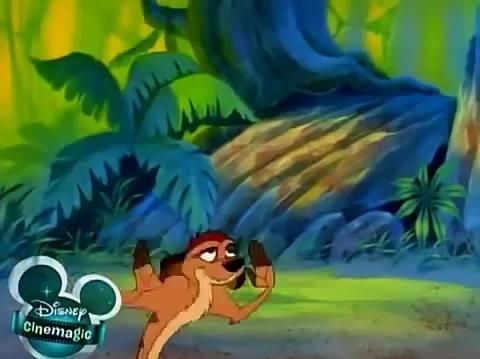