Throw Your Hog in the Ring

"Throw Your Hog in the Ring" is the first segment of the eighth episode of Season 3 of The Lion King's Timon & Pumbaa. It aired on February 19, 1999, along with "Slalom Problem".

"While learning how to wrestle, Pumbaa discovers his bad breath is a deadly weapon."[1]

Back to Timon and Pumbaa, a man named Insane Dwayne shows up and convinces Pumbaa to join the wrestling match and if he does so, he and Timon can earn Bug Dogs as a reward. So Timon decides to train Pumbaa for the match.

Timon, Pumbaa, and Insane Dwayne are now at the wrestling match, with Pumbaa about to fight against Hurricane Pain. While the match is going on, Pain throws Pumbaa out of the ring and the warthog lands can of bug dogs, where he eats some of the food. While he gets back in the ring and loses to pain, Insane Dwayne makes money. When Pumbaa is about to be defeated by Pain, he lets out a belch and his mouth odor causes Pain to pass out, therefore losing the match. Pumbaa becomes the new wrestling champion, nicknamed "The Burpinator." Because Pumbaa won the match, Insane Dwayne loses all his money, much to his anger. He decides to find someone who can easily defeat the warthog.

Pumbaa now fights against various opponents and he wins every match due to his mouth odor. On the final round, Insane Dwayne brings in a tough man nicknamed Masked Muller, who is wearing a mask, hence his nickname. While Pumbaa and Masked Muller fight, Pumbaa tries to defeat his opponent with his mouth odor, but continuously fails due to the mask. Masked Muller then beats up the warthog. When Timon realizes Insane Dwayne's scheme, he decides to get on the ring to save his friend, but gets beaten as well.

Masked Muller is now the new wrestling champion and it is revealed that he tied Timon and Pumbaa into knots. Even though Pumbaa lost the match, Timon tells him that he will always be a champion to him. The two then leave the ring to eat the New York cockroaches. As the episode ends, Pumbaa belches, followed by a sound of crashing cars and he excuses himself. 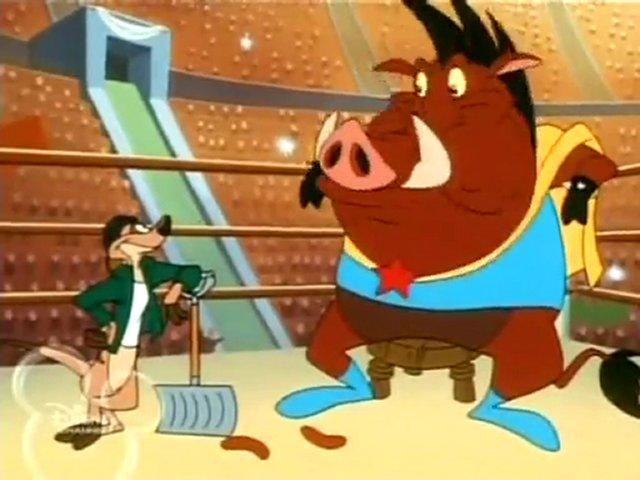