"The Underground Adventure" is the twenty-fourth episode of Season 2 of The Lion Guard. It aired on September 7, 2018.

"While escaping a fire, Kion, Kiara, Tiifu, Zuri and Bunga must navigate through a network of underground tunnels and meet an adorable golden mole with a sweet singing voice. AJ McLean ("Backstreet Boys") guest stars as Kuchimba, the golden mole."[1]

"Kion, Kiara, Tiffu, Zuri and Bunga escape from a fire through a network of underground tunnels, where they find a golden mole with a talent for singing."[2]

The Lion Guard rushes to Pride Rock, following the sounds of Tiifu and Zuri yelling for help. However, once they arrive, they find that the cubs are simply distressed about how the heat is messing up their fur. Kiara arrives with her mother, Nala, who chastises the cubs for calling the Lion Guard for a non-emergency.

Together, the five travel to the mudpots and play in the mud. Muhangus the aardvark, who lives in a warren nearby, becomes annoyed at the noise and orders the cubs to keep quiet. Unbeknownst to the cubs, Njano and Shupavu are also watching their antics, which they report to Scar. Scar then orders Mzingo the vulture to set fire to the grasslands near the cubs.

Mzingo does as he is commanded, and the cubs find themselves walled in by flames. Kion, Bunga, and Kiara attempt to create a fire line, but the flames spread too quickly, and the cubs are forced to escape through Muhangus's burrow.

Once underground, Tiifu becomes frightened of the dark and has a panic attack, in which she desperately tries to escape the warren and ends up causing a rockslide that traps them underground. She then confesses her fears to her friends. The others comfort her and help guide her forward as they search for a way out.

Along the way, the friends encounter Kuchimba, a golden mole, who tries to protect his tunnels from them. Once he realizes that they are simply passing through, he offers to help them find their way out. Tiifu questions Kuchimba as to whether he is afraid of the dark, to which Kuchimba assures her that there is no reason to fear being underground ("Nothin' to Fear Down Here"). Eventually, he leads them to the end of his tunnel and instructs them to take the main tunnel out into the Pride Lands.

Once Kuchimba is gone, Kion realizes that there are several tunnels to choose from. As the friends continue navigating the tunnels, they hear nearby hooves pounding, and run into Thurston the zebra. They question Thurston as to which direction he had come from, but he is unable to recall where he'd been.

Just then, Kion gets the idea to track down Muhangus and ask him for directions. Kiara catches his scent, and Kion and Bunga dig through a tunnel wall to reach his warren. At first, Muhangus is loath to help the friends, but when Bunga threatens to move in with Muhangus, the aardvark begrudgingly agrees. He leads the friends to the end of the tunnel, where Tiifu delightedly takes off toward the light.

However, Thurston begins to panic, having just realized that they have been stuck underground. Tiifu rushes back and calms him, reminding him that there is nothing to fear in the dark. She then leads Thurston into the daylight.

Once above ground, the friends are met by Beshte, Fuli, and Ono, who were putting out the fire and searching for their missing friends. Bunga explains what had happened. Just then, Thurston wanders into another cave and begins to panic, so Tiifu races to help him out of the dark. 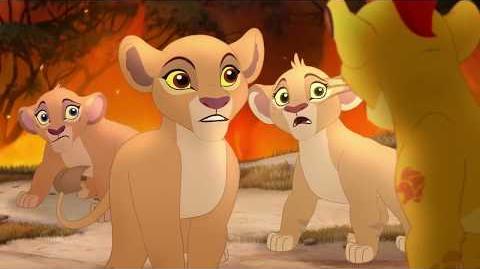 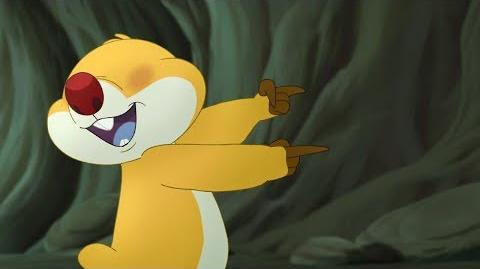 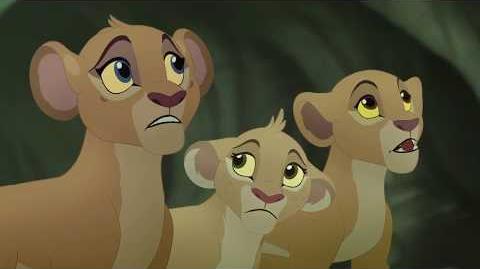 Retrieved from "https://lionking.fandom.com/wiki/The_Underground_Adventure?oldid=229559"
Community content is available under CC-BY-SA unless otherwise noted.