"The Ukumbusho Tradition" is the tenth episode of Season 2 of The Lion Guard. It aired on October 27, 2017.

"Makini and the Guard are excited to attend their first Ukumbusho but bees threaten to ruin the important celebration!"[1]

In Mizimu Grove, Ma Tembo the elephant directs her herd in preparing for the Ukumbusho Tradition, a celebration that honors the peace established between the elephants and lions of the Pride Lands. In the midst of the preparation, Makini arrives to help paint the elephants for the ceremony.

Under Ma Tembo's direction, the Lion Guard begins practicing their lines, while Makini mashes up various fruits to make paints for the celebration. Just then, Timon and Pumbaa arrive to help the Lion Guard with their lines. However, before they can start, Ma Tembo points out that the Lion Guard is traditionally composed of lions only, which prompts Makini to suggest that she paint each Lion Guard member to resemble a lion. Though Fuli is reluctant to accept the idea, Makini dresses up the Lion Guard to resemble lions, then takes off to paint the elephants.

With Makini gone, Timon and Pumbaa attempt to direct the Lion Guard on their lines, claiming that they know best how lions act, since they raised Simba. Kion tries to pitch in his opinion, but Timon silences him, and the duo continue to guide the Lion Guard in their practice.

Meanwhile, Makini is painting sunbursts on the elephants' foreheads when she suddenly runs out of yellow paint. In a panic, she relates to Ma Tembo how she had used all her paint on the Lion Guard, and Ma Tembo suggests that she collect more yellow fruit from the nearby forest. Makini does as she is told, clearing a hive of bees from a clump of yellow flowers in order to bring the plants before the elephants.

As Makini sits down to finish painting the herd, Mtoto's mother struggles to rehearse her lines with Bunga, who continually forgets what he is supposed to be saying. At the same time, Timon becomes frustrated with the Lion Guard for being unable to speak their lines while holding the symbolic Branch of Peace in their mouths. Timon suggests throwing the branch away, but Kion protests that it is essential for the ceremony.

Just then, Simba arrives with his mate, Nala, and daughter, Kiara, as well as the lionesses of his pride. The Lion Guard begins to sing "May There Be Peace", in which they commemorate the peace established between the elephants and lions of the Pride Lands. After the song, Kion describes how Askari, the first leader of the Lion Guard, had made peace with the elephants in order to keep the Circle of Life in balance.

However, in the midst of the ceremony, a horde of bees attacks the elephants, chasing them from the grove. Kion orders his team to chase down the elephants before they can hurt anyone, and the Lion Guard takes off to halt the stampede. While running, Beshte questions why the herd would be so afraid, and Ono explains that elephants are afraid of bees.

Just then, the Lion Guard runs into a group of elephants that have stopped being chased by the bees, and Kion, Fuli, and Ono piece together that the bees are attracted to Makini's yellow paint. The team takes off again, and Ono flies high above the commotion, where he spots Vuruga Vuruga's herd resting in the path of the stampede. Fuli volunteers to deal with the buffalo and manages to scare them off the path just in time for the elephants to thunder past.

The team continues chasing down the stampede, and Beshte observes Mtoto attempting to blast away the bees with dust. Kion wonders if the same trick could work on the paint, and Fuli catches up to Mtoto, suggesting that he try to spray at the paint instead of the bees. Mtoto does as he is told, and the paint disappears, prompting the bees to fly away. Seeing Mtoto's success, the Lion Guard resolves to use the same trick on the other elephants.

From above, Ono reports that the elephants are racing into Sehemu Pass, where they could get stuck between the rocks, but Kion declares that this is a good development. The Lion Guard then gathers at the entrance of the pass, and when each elephant gets stuck, Mtoto sprays their foreheads with dust, clearing away the paint and effectively warding off the bees.

As the elephants recover from the bees, Mtoto notices that his mother is missing, and Ono spots her running along the top of Mapango Cliffs, where the soil is dry and could collapse at any moment. The Lion Guard rushes to the site of the scene, and Bunga bounds up the cliffside until he reaches Mtoto's mother. There, he calms her by reciting their lines from the ceremony, and Mtoto's mother declares that those who are brave can do anything they set their minds to.

Back at Mizimu Grove, Ma Tembo apologizes to Simba for panicking and explains that bee strings in the trunk can be very painful. Makini rushes over and apologizes for causing the chaos, to which Ma Tembo assures her that she had not known. When Makini volunteers to collect more yellow fruit for the paint, Kion suggests continuing the ceremony without any paint. Ma Tembo protests that it is difficult for elephants to break with tradition, but Simba tells her that this could simply be a new tradition for the elephants of the Pride Lands. Ma Tembo then agrees to the new plan, and the Ukumbusho Tradition continues in a new vein. 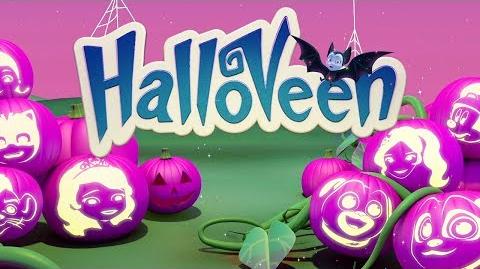 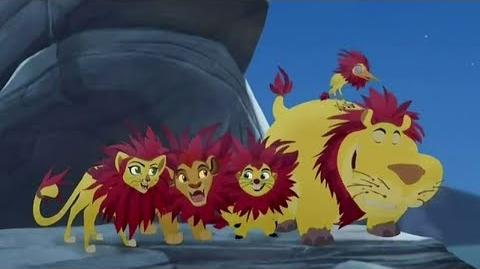 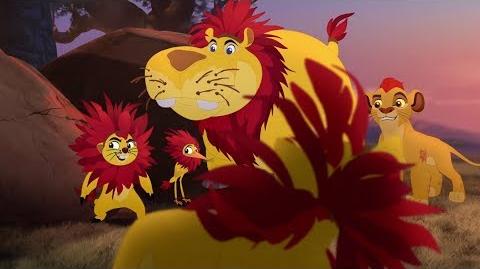 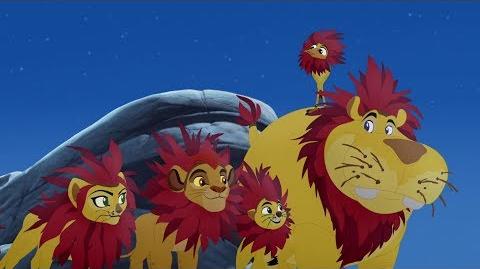 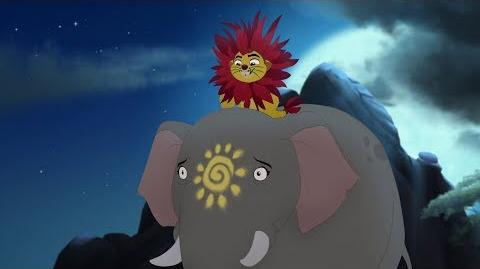