The Truth About Kats and Hogs

"The Truth About Kats and Hogs" is the second segment of the sixth episode of Season 3 of The Lion King's Timon & Pumbaa. It aired on February 5, 1999, alongside "Visiting Pig-nitaries".

"An Animal Behavioral Scientist can't decide if she wants to study Timon or Pumbaa."[1]

While Pumbaa is about to get some bugs, he runs into a woman named Jean Farrell, who is an Animal Behavioral Scientist. The terrified warthog runs to Timon to tell him that he saw a human watching him.

Timon and Pumbaa go to Jean, who watches Pumbaa and calls him Melvin. While she finds Pumbaa ugly, yet charming, she gets annoyed by Timon's presence and throws the meerkat out of the way. Jean suggests that in order to better understand Pumbaa, she needs to act like a warthog, which Pumbaa doesn't seem to like as he believes she is after his bugs. Timon shows and attempts to protect his friend, but gets thrown by Jean once again.

Jean then gives Pumbaa a bag of bugs, making the warthog no longer be afraid of her. While Pumbaa enjoys his food, Jean decides to learn more about Timon, whom she nicknames Billy Bob, as she sees how "persistent" the meerkat is. The scientist then snatches the bag of bugs away from Pumbaa and gives them to Timon.

Pumbaa goes to Timon and asks him if he could have his bugs. While Timon refuses to give Pumbaa the bugs since Jean wouldn't let him do so, he decides to take a risk and give one to him anyway.

Jean soon finds both Timon and Pumbaa interesting, but has a hard time deciding which one of them to study. She then decides to give up and leave the jungle. Therefore, it is up to Timon and Pumbaa to help her decide which animal to study: the meerkat or the warthog. As Jean is getting packed, Timon and Pumbaa tell her some facts and some "interesting" facts about meerkats and warthogs.

Annoyed, Jean attempts to escape Timon and Pumbaa, but continuously fails as the two friends manage to return to her. The woman then goes crazy and decides to study both of them, as well as to become them. Two male Naturalists see Jean acting crazy and they capture her, thinking she's a Wild Woman of the Jungle. As the men take Jean away, Timon and Pumbaa are going to miss her as they state that she brought out the best in them. 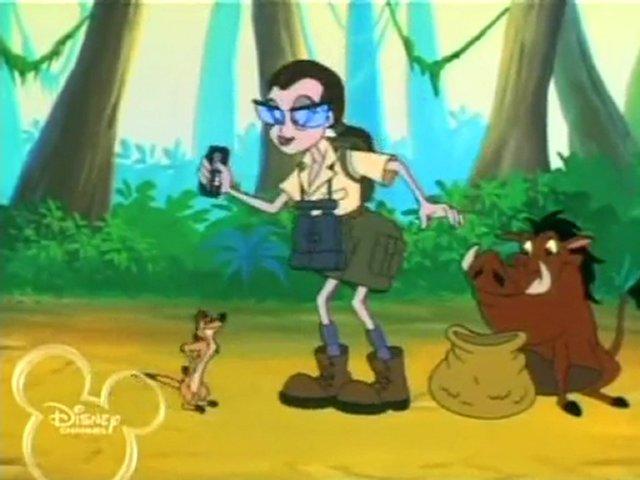