"The Trouble with Galagos" is the sixteenth episode of Season 1 of The Lion Guard. It aired on August 5, 2016.

"The Lion Guard helps a leopard named Badili stand up to a bully who is challenging his territory. Jack McBrayer (Disney XD's Wander Over Yonder) guest stars as Badili."[1]

While lounging at Hakuna Matata Falls, the members of the Lion Guard content themselves by watching Bunga perform several dives into a pool at the base of the falls. In the middle of the game, a group of galagos sprints onto the scene, yelling for help. Beshte questions one of the galagos, Laini, on why they are so upset, and Laini explains that a ferocious leopard has settled into their tree. Kion resolves to help the helpless galagos, but before the group can leave, Ono informs the team that Shingo the giraffe is stuck in a tree in Ukuni Woods.

After promising to come back for the galagos, the Lion Guard sets out to free Shingo, whose neck is stuck in the branches of an acacia tree. Bunga climbs up the trunk and carefully pries Shingo's neck and tongue free, allowing him to escape the branches of the acacia. Just then, the galagos reappear, having been frightened away from the falls by Pumbaa's flatulence. The Lion Guard reassures the galagos that they are safe and tries to convince them to return to the falls, but Laini insists that they remain with the Lion Guard.

The Lion Guard questions whether Badili has territory of his own, and he admits that he lives in Mirihi Forest, a patch of woodland in the Back Lands. He pushes on to say that he would rather share the galagos' tree than leave, but Kion insists that Badili return to where he belongs. Though the leopard tries several tactics to stay in the Pride Lands, he eventually gives in and follows the Lion Guard back home to Mirihi Forest.

Along the way, Badili stalls for time, and Kion demands to know why the leopard is not keen on returning home. Instead of answering, Badili forges ahead of the Lion Guard, returning to his tree alone. As the leopard disappears into the brush, Kion decides to follow him and see why he is acting so strangely. Together, the Lion Guard hides in the bushes near Badili's tree and watches as he is bullied by a fellow leopard named Mapigano. Outraged by Mapigano's cruelty, the Lion Guard rushes to Badili's defense and forces Mapigano to give Badili his territory back. Mapigano begrudgingly leaves, and Badili thanks the Lion Guard profusely for their help.

The next day, the Lion Guard is patrolling through Embamba Canyon when they are once more met by terrified galagos. The team returns to the galagos' tree, where they find Badili once more resting in its branches. The team asks him why he had left his territory again, and an ashamed Badili confesses that Mapigano had driven him out again. At Badili's words, Kion realizes that he had made a mistake in having chased off Mapigano himself. He informs his team that Badili must face Mapigano alone to show that he is not afraid and then offers to teach Badili how to stand up for himself. Though hesitant, Badili agrees to train with the Lion Guard.

At the start of his training sessions, Badili struggles to act confidently, but over time, he learns to face his fears and be strong and swift. Once fully trained, Badili is tested by the Lion Guard, who question him on what he will do if Mapigano challenges him. Badili passes every test, and the Lion Guard expresses their confidence in his newfound determination.

Together, the Lion Guard and Badili return to Mirihi Forest, where the Lion Guard waits in hiding as Badili confronts Mapigano. With his newfound determination, Badili demands that Mapigano leave his territory, but Mapigano simply springs into attack mode, laughing when Badili's confidence begins to wither. The bigger leopard continues to taunt Badili until Badili takes a deep breath and declares that he is not afraid. He then dodges all of Mapigano's attacks and roars for him to leave his territory. Thoroughly intimidated, Mapigano flees, and the Lion Guard cheers for Badili's bravery.

With Mapigano gone, Badili admits that he had been terrified, but the Lion Guard reassures him that he had looked nothing short of brave. Ono praises Badili for having stood up for himself, and Badili thanks the Lion Guard for believing in him. Kion quickly corrects him, reminding Badili that he had believed in himself. The Lion Guard then leaves to inform the galagos that they are clear to return home.

Once back in the Pride Lands, the team takes a break at Hakuna Matata Falls, but they are soon interrupted by Laini, who informs them that someone else has invaded the galagos' tree. The Lion Guard rushes to the scene, where they find Bunga resting in the tree branches with Laini's galago friends. Upon seeing Laini, Bunga pulls her into a hug, and Laini declares that perhaps Badili had not been so bad after all. 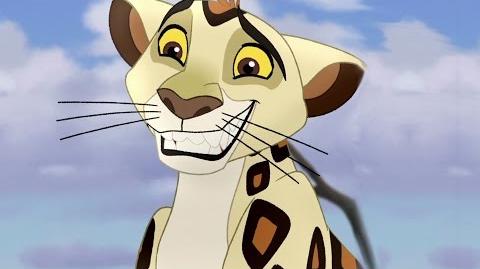 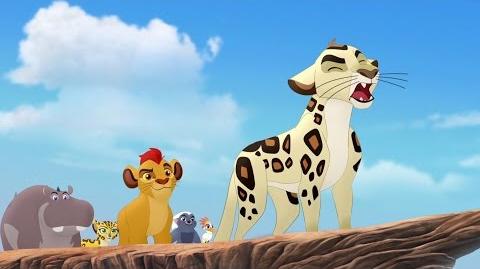 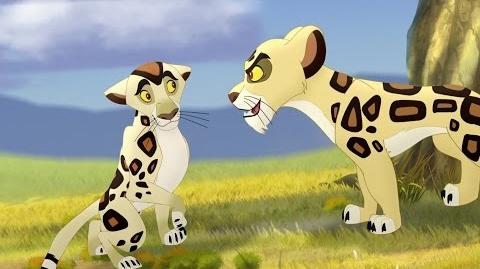 Retrieved from "https://lionking.fandom.com/wiki/The_Trouble_with_Galagos?oldid=287597"
Community content is available under CC-BY-SA unless otherwise noted.