"The Trail to Udugu" is the twenty-third episode of Season 1 of The Lion Guard. It aired on January 6, 2017.

"While Nala takes Kion and Kiara on a trip to teach them the importance of working together, Simba is left in charge of the Lion Guard."[1]

Kiara, the princess of Pride Rock, uses her tracking skills to hunt down her brother, Kion, who is in hiding from her. She manages to find him crouched behind a boulder and tackles him to the ground, after which she boasts about her impressive tracking skills. Kion simply retorts that she had been lucky and playfully pounces on her, instigating a wrestling match between the two.

From the sidelines, the cubs' parents, Simba and Nala, watch proudly. Simba comments that Kiara had found Kion in record time, and Nala declares that they are ready for a special day. Together, the two descend Pride Rock to speak with their cubs, who are still playing and squabbling. Nala steps forward and tells Kiara and Kion that they are ready to accompany her on the Trail to Udugu, which is a special ceremony for royal siblings. Simba assures Kion that in the absence of their leader, the Lion Guard will be led by Simba.

In the Lair of the Lion Guard, Kion informs his team of Simba's intention to lead them while he is away. He then bids them goodbye and leaves them to wait for Simba. Though Ono begins to anxiously preen and fret over the state of the Lair, Bunga assures him that he has nothing to worry about, and sings "When You're Running With the King", in which he explains what Simba is like.

Simba happens to overhear the song and informs Bunga that his performance had gotten one thing right: that Simba is excited to lead the Lion Guard. Simba then gathers the Lion Guard for their morning patrol and leads them out of the Lair.

Meanwhile, Nala leads Kion and Kiara along the Trail to Udugu. As they walk, Kion questions Kiara as to what she thinks will be waiting for them at the end of the trail, and Kiara answers that it will probably be animals excited to meet their future queen and her little brother. Kion argues that as leader of the Lion Guard, he would be received with such a reception, to which Kiara teases that they will have to see. The two cubs then begin to playfully race one another.

Across the Pride Lands, Simba leads the Lion Guard on their morning patrol. Along the way, the Guard tries to correct him on his route, but Simba insists that they take his chosen path. Though hesitant, the Guard agrees to the king's wishes, and the team veers off in a new direction.

On the Trail to Udugu, Kion asks Nala how much farther they must travel, and she answers that Udugu is not an easy place to find. Kiara boasts that she will find Udugu first, and Kion takes chase, unintentionally steering them toward a steep cliff. Nala yells a warning, but too late, the cubs tumble over the edge and hang on by their claws. Just in time, Nala pulls them to safety and reminds them that they must find Udugu another way.

Back in the Pride Lands, Ono spots a mudslide heading toward a nest of ostrich eggs, but he is cut off in his report by Simba, who finishes the report for him. He then instructs the Guard to follow him while he moves a log in the way of the falling mud. Though confused, the team follows him, and Simba orders them to jump from rock to rock in order to avoid getting caught in the mud. Beshte comments that Kion usually has him walk through the mud, but Fuli reminds him that Simba is in charge, not Kion.

Beshte does as Simba commands, but accidentally slips on the rocks and falls into the mud, carrying Bunga, Fuli, and Ono with him. The four tumble down the slope and dislodge Simba's log, causing it to roll toward the ostriches' nest. Before the log can reach the bottom of the slope, Beshte leaps forward and stops it from crushing the eggs, but Ono warns that the eggs will now be caught up in the mud. Sure enough, the eggs are swept away by the mud, and the Lion Guard rushes to save them. They return the eggs to the ostriches, who thank them for their help.

In the meantime, Nala leads Kion and Kiara to a patch of thorns, which she insists is part of the Trail to Udugu. The cubs rush into the thorns and each try to take different paths, but both find themselves in too great of pain to continue. Suddenly, the two realize that Nala is gone and begin to cry out for her. Nala, however, watches them from the bushes and comments that they are now truly on the Trail to Udugu.

In the Pride Lands, Simba expresses elation at the Guard's first rescue with the king and wonders what their next challenge will be. As he starts to lead the Guard further into the kingdom, Beshte comments that at least he hadn't been mad about their nearly losing an ostrich egg, to which Fuli counters that it's not Beshte's fault that he can't jump like a lion. She then asks why they are a team if they are all going to be tasked with doing the same thing, which prompts Bunga to remind her that Simba is the king and knows what he's doing.

Just then, Ono flies up and starts to report trouble when he is interrupted by Simba, who declares that a herd of gazelles need their help. The Lion Guard then follows his lead down the slope to rescue the gazelles.

Meanwhile, Kion and Kiara search for Nala, who is still missing. When neither cub turns up any leads as to where she is, Kion laments how they do not know where Udugu is and thus cannot possibly know where to find Nala. This gives Kiara an idea, and she begins sniffing for Nala's scent in the underbrush. She picks up her trail on a path through the trees, and she and Kion begin to follow it through the woods.

Once on the trail, Kion spots Nala's pawprints, and the cubs track them to the bottom of a steep cliff. Confused, the cubs wonder where Nala could have possibly gone.

Back in the Pride Lands, Ono reports that the gazelles are trying to reach a patch of grass above an unstable pile of rocks. Simba comments that the rocks will fall if the gazelles try to ascend them and then shouts for the Lion Guard to follow him. As Simba races away, Beshte asks the others if they should warn Simba that gazelles are easily spooked, but Bunga assures him that Simba know what he's doing.

The team streaks across the plains toward the gazelles, who shy away at the Guard's rapid advance. The herd begins to climb the rock pile, dislodging stones, and Ono yells for the Lion Guard to halt their approach. Simba, however, continues to run and gets his tail stuck underneath a massive boulder. The rest of the Lion Guard gathers around him, and Simba assures them that he is uninjured.

In the meantime, Kion and Kiara muse over where Nala could be, and Kion points out that Nala could have climbed up on a nearby ledge and followed a trail along the cliff. The cubs attempt to leap onto the ledge themselves, but are unable to get a firm grasp on the edge of the cliff. Realizing that they cannot reach the ledge on their own, Kion suggests that he give Kiara a boost so that she can continue tracking Nala. Kiara asks Kion how he will reach the ledge, and he admits that she is the better tracker and should therefore be the one to continue searching for their mother.

Kiara then clambers onto Kion's shoulders and strains to reach the edge of the cliff. Eventually, she gets a firm hold on the ledge and pulls herself to the top of the cliff. There, she sees Nala, who greets her cubs warmly and bounds down from the ledge. A confused Kion questions why Nala had left them and not helped them find Udugu, and Nala explains that the cubs had found Udugu on their own. When the cubs react with puzzlement, Nala explains that "Udugu" is another word for "kinship" and that the two had found Udugu while working together to find her.

Back in the Pride Lands, the Lion Guard overhears ostriches crying out in fear, and Ono reports that the gazelles are stampeding toward the ostriches' nest. The Lion Guard turns to Simba for instructions, and he orders them to leave him behind and save the ostrich eggs instead. Just then, a large boulder tumbles down from the top of the rock pile, and Fuli heroically saves Bunga from being crushed.

After the rescue, Fuli declares that they cannot leave Simba, for he is in danger from the falling rocks. Simba gets the Guard's attention and tells them that he has been ordering them around all day when he should have figured out how their team works. He then asks what they would do if Kion were in Simba's place, and Fuli explains that she and Ono would go after the herd, while Beshte and Bunga would stay behind to assist the king. Simba submits to these orders and starts the Lion Guard's chant as the team races away to fulfill their separate duties.

Together, Fuli and Ono catch up to the gazelles, and Fuli orders Ono to speak with Swala, the leader of the gazelles, while she calms the ostriches. Both members are successful, and the gazelles pull to a halt before they can trample the ostrich eggs. At the same time, Beshte and Bunga work together to free Simba. No sooner have they freed him when the rock pile begins to collapse, and the three escape to safety, where they reunite with Fuli and Ono. Simba compliments the Lion Guard on their success and declares that Kion would be proud of them.

At Pride Rock, Simba reunites with his mate and cubs. He asks whether they had found Udugu, and the cubs explain that they had learned to work together as brother and sister. Kion then questions how Simba had fared with the Guard, and Simba admits that working with Kion's team had helped him find Udugu as well. He stresses the importance of Udugu and reminds the cubs that they will one day be responsible for the kingdom of the Pride Lands. 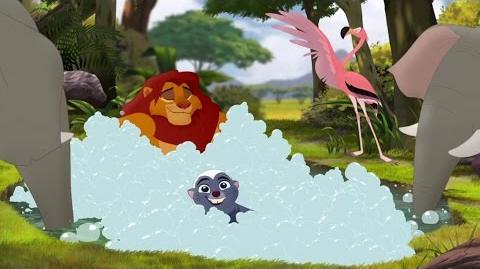 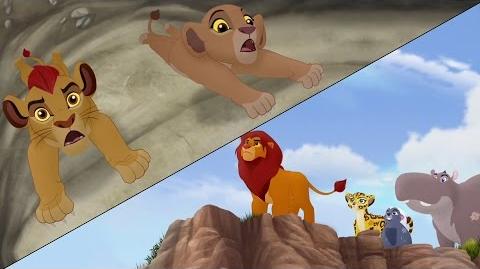 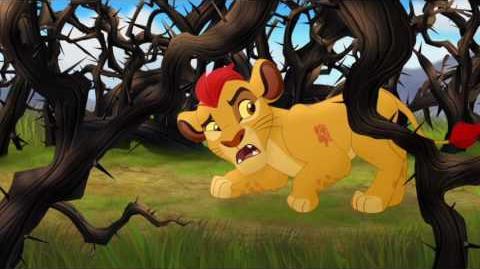 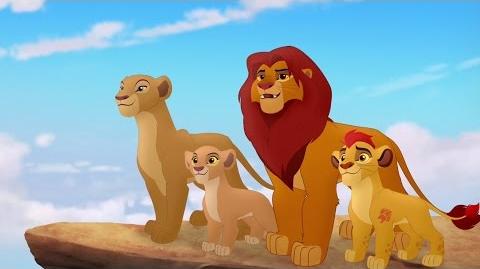 Retrieved from "https://lionking.fandom.com/wiki/The_Trail_to_Udugu?oldid=287591"
Community content is available under CC-BY-SA unless otherwise noted.