The Spy's the Limit

"The Spy's the Limit" is the first segment of the thirty-third episode of Season 3 of The Lion King's Timon & Pumbaa. It aired on August 13, 1999, alongside "Ready, Aim, Fire".

"After injuring a secret agent, it's up to the boys to save the day!"[1]

Timon and Pumbaa visit Monte Carlo. The two friends enter a casino, only to get thrown out by the French owner. Then, a secret agent appears and fights off some ninjas. After the fight, Timon and Pumbaa see that the spy is about to enter the casino without his brief case. When they let him know that he forgot his briefcase, the agent runs into a wall and falls down the stairs, making him out cold.

Timon reads a list of the spy’s actions, saying that he will fight ninjas, which he just did, then beat someone at a game of Go Fish, and then save the world. This makes Timon want to become a spy, but Pumbaa tells his friend that being a secret agent is serious business, which the meerkat replies that it’s very Hakuna Matata. Timon gives Pumbaa a codename, which is P.U. and tells him that he will guard his belongings unless they are needed at certain points. The scene cuts to Timon’s very own title sequence as a secret agent.

Timon reenters the casino and reveals to the waiter that he is a spy with a female assistant (Pumbaa in disguise). Timon and Pumbaa are then introduced to a man named Count Down, the spy’s enemy. Pumbaa notices that Count Down is wearing the exact same emblems the ninjas the spy fought earlier wore. After Count Down wins the game of Go Fish, he is about to do his diabolical plan.

Timon and Pumbaa are about to stop Count Down from doing his plan. They place a spy car outside a casino, but are having a hard time controlling the vehicle. The car sends the duo flying in the air and landing on Count Down’s car.

In order to not get caught, Timon and Pumbaa disguise themselves as ninjas. However, Count Down can recognize Timon and he sends his ninjas to fight him and Pumbaa. When Pumbaa defeats the ninjas by making them fall into a hole, the warthog falls as well, leaving Timon to stop Count Down on his own. When Timon tries to open his briefcase while confronting the villain, he accidentally pushes a button that destroys the briefcase and makes him be trapped.

Count Down shows Timon that his diabolical plan is to destroy the sun and that after he does so, everyone will want to buy his electric heaters. Pumbaa then shows up in his female disguise, convincing Count Down that he would love to have some of his heat. But when Timon tries to get Pumbaa to set him free, Count Down traps the warthog and he's about to shoot the two friends. Pumbaa tells Timon that he was right when he told him that getting involved in the spy business was a bad idea, making Timon admit his mistake.

Suddenly, one of Count Down’s ninjas reveals the be the secret agent from earlier and he stops Count Down from destroying the sun and shooting Timon and Pumbaa. After Count Down gets defeated, the spy tells Timon and Pumbaa that he was pretending to be unconscious so that they can distract their enemy while he sabotages his HQ. Pumbaa then realizes that Timon was right about getting involved in the spy business after all, even though the meerkat didn’t know what he was doing. But then, Timon accidentally pushes a button that destroys the earth, making Pumbaa tell his friend that it couldn't have hurt to actually know what he is doing. 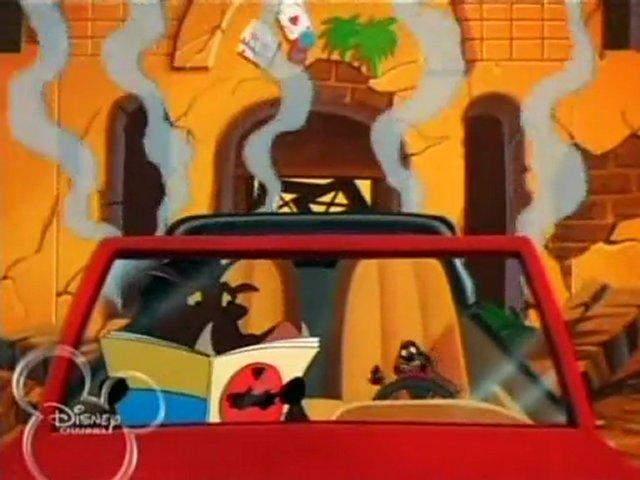