"A meteor lands right between Timon and Pumbaa, causing an argument that only Rafiki's wisdom can resolve."[1]

Rafiki is painting Timon and Pumbaa on his tree, but when he puts a yellow line above them, some the paint goes down between them, which makes Rafiki become suspicious.

Meanwhile, Timon and Pumbaa are stargazing, with Pumbaa questioning the glowie lights of the big bluish black thing. Timon tells Pumbaa that they are called chunks of the big bluish black thing. After the two converse about their friendship, a meteorite falls and lands between them. Pumbaa suggests that they should put it back where it belongs, but Timon wants them to have nothing to do with it, which leads the two to argue over what to do with it. Finally, the two turn their backs at each other.

When morning arises, Rafiki comes and sees Timon and Pumbaa with their backs turned at each other and the meteorite between them, much to the baboon's interest. Rafiki then hits Timon and Pumbaa on the head with his stick to "knock some sense into them." He then explains to the two what exactly happened the previous night.

After Pumbaa fails to throw the meteorite back up in the sky, Timon is about to tell his friend how can achieve doing so until he is interrupted by Rafiki, who is making sure that the meerkat's not helping Pumbaa as he believes they are no longer friends. When the baboon leaves, Timon comes up with a plan on how he could make Pumbaa put the meteorite back up where it belongs while he has nothing to do with it. He suggest that they should climb a really high mountain.

While walking on the mountain, Pumbaa becomes tired of carrying the meteorite, leading to Timon carrying it (considering it to be an exercise rather than a help) until he becomes just as tired. Therefore, Pumbaa suggests that he should carry it without any help from his friend. When Timon and Pumbaa get to the top, Pumbaa is about to try to throw the meteorite back up once again, but then he is stopped by Timon, who tells him that if he does so, the meteorite will fall all the way down and they will have to climb up the mountain again. The meerkat then tells his friend to relax while he builds something, which is a net tied between two trees. Pumbaa comments that the net looks like it would be perfect to use to get the meteorite back up in the sky and suggests that he should build one as well, but Timon suggests that he can "purchase" the one he built.

Pumbaa uses the net to send the meteorite back up where it belongs and this time, he succeeds. Timon, Pumbaa, and Rafiki are elated, and then after hearing Timon and Pumbaa using the word "we," Rafiki goes to the duo. Timon and Pumbaa explain to the baboon that Pumbaa putting the meteorite back where it belongs while he has nothing to do with it does not necessarily mean they are no longer friends. Rafiki is delighted by the two friends proving him wrong and states that they were not helping each other after all.

When Rafiki walks off, Timon and Pumbaa state that they have really been helping each other all along and suggest that they should not let Rafiki know. The two then go back to their stargazing, happy that nothing will ever come between their friendship. Meanwhile, Rafiki fixes the part of the yellow paint that went down between Timon and Pumbaa and puts the other half of it above the two, indicating that he knew all along that Timon and Pumbaa worked together to solve the problem with the meteorite and will always be the bestest of friends no matter what happens. 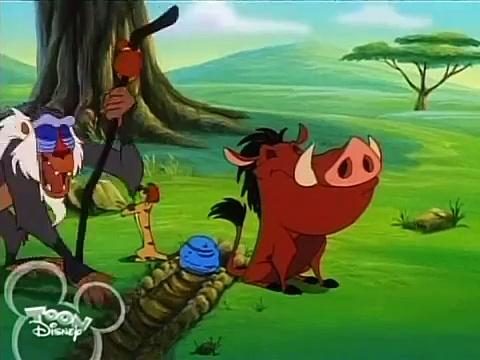 Retrieved from "https://lionking.fandom.com/wiki/The_Sky_is_Calling?oldid=296534"
Community content is available under CC-BY-SA unless otherwise noted.