"When a crocodile named Makuu takes over as leader of the crocodiles and his aggressive antics send the Pride Lands into chaos, Kion questions whether to intervene or respect animal traditions. Blair Underwood (ABC's "Marvel's Agents of S.H.I.E.L.D.") guest stars as Makuu. Set in the African savanna, "The Lion Guard" follows the adventures of Kion, the second-born cub of Simba and Nala, and his diverse group of friends, each with a unique skill, as they unite to protect the Pride Lands. "The Rise of Makuu" premieres on WATCH Disney Junior on December 14."[1]

The Lion Guard races to the rescue of an animal crying for help. However, when the team arrives at the scene, they find a hyrax named Pim stuck in a thorn bush. Annoyed at the false alarm, the Guard proceeds to free Pim, but the hyrax is almost immediately swallowed by Ushari the cobra. In response, Bunga frees Pim and tosses Ushari away. Though Pim at first hugs Bunga gratefully, he soon runs away in terror of Bunga's smell.

The friends travel to Big Springs, where Beshte shows off his home to his friends. Bunga attempts to get the fish to lick him clean, but they steer clear of his odor. No sooner has this happened when Pua, leader of the crocodiles, approaches the riverbank and asks Basi if it's all right for the crocodiles to eat the fish. Basi politely declines, explaining that there are still not enough fish to feed the float, and Pua respectfully leaves. A young crocodile named Makuu, however, challenges him to a mashindano, thinking the float has a right to the fish in Big Springs.

Kion is disturbed by this turn of events and asks his father about Makuu's challenge. Simba explains that he must recognize and respect the traditions of other species, even if he doesn't always agree with them. Meanwhile, Ono attempts to clean off Bunga at Hakuna Matata Falls ("Don't Make a Stink").

Later, the animals of the Pride Lands gather at Lake Matope to witness the mashindano, and Makuu manages to pull a victory over the aged Pua. Simba comes forward, recognizing Makuu's leadership, and thanks Pua for his service. Makuu then leads his float into the river, with Kion looking after him worriedly, wondering if the Pride Lands are in danger.

After Pua's defeat, the Lion Guard gathers in the Lair of the Lion Guard, where Ono makes another attempt to mask Bunga's stink. In the midst of the gathering, Kiara rushes up and warns Kion that the giraffes have moved into the baboon's forest. The Lion Guard rushes to the rescue, and Kion discovers that Makuu has invaded Big Springs, which has forced the other animals to switch habitats.

Kion confronts Makuu, asking him to leave Big Springs, but the crocodile refuses, mocking Kion for being unwilling to fight. Though Bunga encourages Kion to use the Roar of the Elders, the cub decides against it, not wanting to be like Scar and lash out in anger. Instead, Kion goes to Pua, asking for him to call for another mashindano, but Pua reminds Kion that Makuu is much stronger than him. He then advises Kion to back down if he's not willing to fight Makuu.

The five return to Pride Rock, where Kiara reveals that there's been an invasion of baboons. While the baboons run around in chaos, wrecking Pride Rock, Ono manages to use mint leaves to rid Bunga of his stink. Despite this small victory, Kion moves off to think and encounters the ghost of his grandfather Mufasa, who advises him to stand his ground.

Inspired by the words of his grandfather, Kion and his friends decide to demonstrate the Roar of the Elders on a grove of trees to show Makuu what he would be in for if he should attempt a fight. While Bunga, Fuli, and Ono set out to clear the grove of animals, Beshte and Kion confront Makuu. However, as they're clearing the grove, Bunga, Fuli, and Ono spot Pim sitting peacefully in one of the trees, and Bunga climbs up to bring him to safety. Ono gives the signal, and Kion roars into the trees, clearing them all of their branches. In awe, Makuu backs down and leads his float out of Big Springs.

After Makuu leaves, the animals return to their habitats, and Basi invites the crocodiles to return to Big Springs once the fish population spikes. The Lion Guard watches in satisfaction, and Bunga laments smelling so good, since Pim is now joyfully clinging to his back. 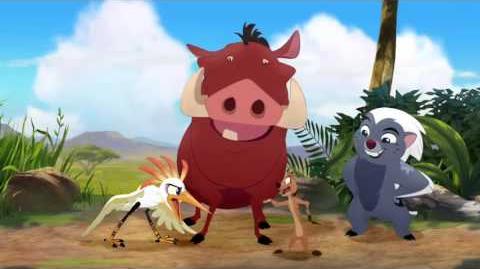 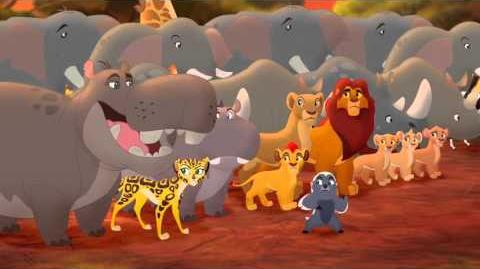 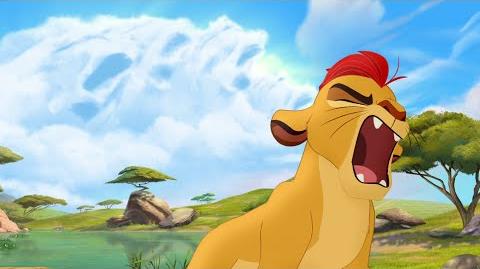 Retrieved from "https://lionking.fandom.com/wiki/The_Rise_of_Makuu?oldid=295454"
Community content is available under CC-BY-SA unless otherwise noted.