The Pal Patrol is a book inspired by The Lion King. It was published by Advance Publishers on November 28, 1997.[1]

Timon and Pumbaa are perched on the top of Pride Rock, waiting for their best friend, Simba. Timon complains to Pumbaa, saying that Simba has forgotten about them now that he is king. Just then, Simba arrives and explains that there was an emergency with a herd of elephants. Presently, the trio heads into the Pride Lands to enjoy a relaxing, worry-free afternoon.

Hardly any time has passed, however, before Zazu calls on Simba to rescue a cub stuck in a tree. Zazu then turns on Timon and Pumbaa, criticizing them for teaching the cubs how to hunt for bugs. Simba tells Timon and Pumbaa that he will catch up with them later, and prepares to leave with Zazu, but Pumbaa asks Simba if he even likes being the lion king. Simba replies that he likes having everyone depend on him; it gives him a sense of responsibility. He then heads off with Zazu. Determined not to let this change of events ruin their day, Timon and Pumbaa go in search of bugs.

While on the hunt, Timon and Pumbaa stumble upon a small brush fire. The warthog offers to stay and keep and eye on the fire while Timon heads to the watering hole to get help. They follow through with this plan, and Timon runs off.

As Pumbaa is guarding the fire, a herd of zebra stampedes toward him. Luckily, the herd stops when they see Pumbaa, and he explains about the fire. Grateful for the warthog's help, the zebras gallop away in a different direction. Pumbaa swells with pride, but just then, Timon arrives with a herd of elephants. The elephants spray water from their trunks at the fire and soon it is diminished to a few wisps of smoke.

Presently, Simba arrives on the scene and congratulates Timon and Pumbaa for taking such good care of the situation. The young lion then asks the pair if they would like to be the official fire patrol of the Pride Lands. Timon and Pumbaa agree, but on one condition: Simba must promise to try to spend more time with his friends. Simba agrees, then challenges the pair to a race to the watering hole. Glad at their friend's change of spirit, Timon and Pumbaa follow. 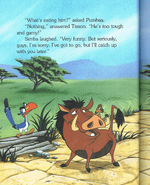 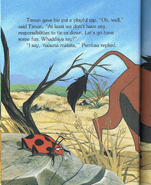 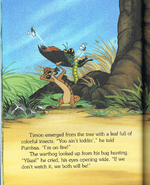 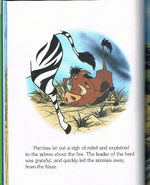 Retrieved from "https://lionking.fandom.com/wiki/The_Pal_Patrol?oldid=208772"
Community content is available under CC-BY-SA unless otherwise noted.