"The Man From J.U.N.G.L.E." is the second segment of the sixteenth episode of Season 2 of The Lion King's Timon & Pumbaa. It aired on October 28, 1996 on the syndicated Disney Afternoon block, alongside "Timon on the Range".

"Timon dresses up as Super Duper Hero X as part of a get-rich-quick scheme."[1]

Pumbaa is excited to meet a famous superhero named Super Duper Hero X. When the spotlights turn on, a big X comes out of the ground with Timon, dressed as a superhero, standing on it. Pumbaa believes that the meerkat is Super Duper Hero X, but Timon tells his friend that he's not really the superhero and that he's just impersonating Hero X to make money.

Timon tells Pumbaa to anyone that he is Hero X, no matter what. Pumbaa states that "no good shall ever come at this", but Timon doesn't think that anything bad could happen if he is mistaken for a superhero, until he gets kidnapped by Hero X's archenemy, Chromosome Quint. When Pumbaa worries about Timon getting abducted and wonders who could help him, Speedy shows up, stating that he's here to meet Hero X. Pumbaa breaks the news by telling his friend that the hero got kidnapped in Quint's aircraft. Speedy states that whenever something goes wrong, he sings. After Speedy performs a song, Pumbaa suggests that they should find Timon.

Meanwhile, Chromosome Quint introduces himself to Timon, whom he mistakes for Hero X. He tells the meerkat that he is going to reveal Hero X's secret identity to all the jungle animals, who are gathering around Pride Rock for the presentation of a newborn lion cub. Timon tries to tell Quint who he really is, but his enemy still thinks he's the superhero.

Pumbaa and Speedy find the aircraft getting close to Pride Rock. The two friends get to the very top of the rock to try to enter the aircraft. When Pumbaa wonders how he and Speedy could get inside, the snail suggests that they should sing, causing them to slide down to the inside of the aircraft where Timon and Quint are. Timon tries to get Pumbaa to convince Quint that he's not Hero X, but the warthog, having recalled his friend's suggestion from earlier, states that he is.

Pumbaa then gets trapped by Quint, who runs out of the room. Pumbaa shows Timon that he brought Speedy with him, but the meerkat doesn't believe that a snail could help them escape. Speedy reveals to his friends that he is Super Duper Hero X. After the hero frees Timon and Pumbaa from Quint's trap, the three prepare to defeat their enemy.

Quint is about to reveal Hero X's secret identity to the animals. But then, Timon, Pumbaa, and Speedy turn off the power, believing that Quint is defeated. But little do they realize, turning off the power means causing the aircraft to stop flying. The aircraft is about hurt the animals and destroy Pride Rock, with the narrator questioning what would happen next.

The scene then switches to Speedy's home, where Timon and Pumbaa say goodbye to their friend and also thanking him for saving Pride Rock and all the jungle animals. Timon finds it funny how after they have been risking their lives saving Speedy, he was a superhero all along while Pumbaa is glad that Chromosome Quint will remain locked up behind bars. But then, a seagull, which turns out to be a craft controlled by Chromosome Quint, kidnaps Speedy, making Timon and Pumbaa have to save their friend. 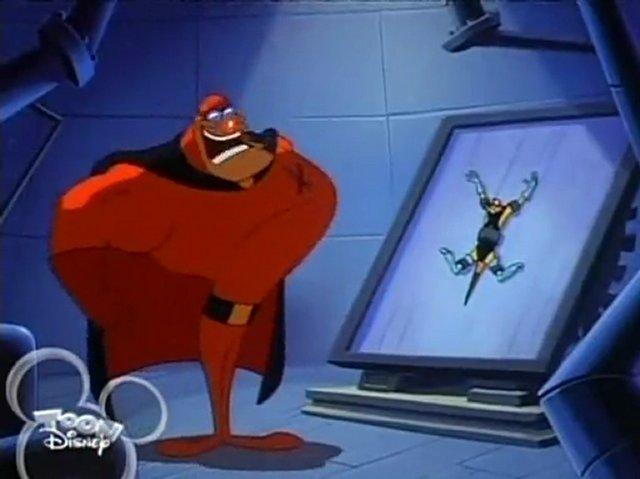