"The Lost Gorillas" is the twenty-second episode of Season 1 of The Lion Guard. It aired on December 2, 2016.

When Zazu gets his bill stuck in a beehive, Bunga climbs into the tree to free him. After the rescue, Zazu thanks the Lion Guard for their help and informs them that the pangolins have been spraying excessively elsewhere in the Pride Lands. Kion agrees to scout out the situation, and the Lion Guard departs to deal with the problem.

After the gorillas vow to leave the pangolins alone, Kion lets them up and demands to know who they are. The two introduce themselves as brothers Hafifu and Majinuni, and tell Kion that they're looking for a lion named "King Zimba." Bunga informs the gorillas that Kion is Simba's son, and the brothers react with shock that Kion is a prince. They then excitedly declare that they are princes as well.

Kion is confused, so Majinuni explains that they are here to deliver a message from their father, King Sokwe. Fuli is doubtful of their claims, but before the Lion Guard can question them, the brothers take hold of Ushari the snake and toss him at a baobab fruit for fun. Kion reprimands them for their foolishness, but the gorillas simply reply with their catchphrase, "Kuishi ni kucheka," which means "To live is to laugh."

After the fiasco, the Lion Guard leads Hafifu and Majinuni to Pride Rock, where Kion relates the situation to his father, Simba. To Kion's surprise, Simba agrees that the message is important and explains that every wet season, King Sokwe informs Simba if their two kinds are still at peace or not.

Just then, the brothers come before Simba, but when prompted to relay their message, they admit that they have forgotten it. With this news, Simba is forced to ask Kion to deliver the gorillas back home and find out what Sokwe's message is. Kion wonders if the brothers should return home themselves and bring back the message again, but Simba points out that peace with the gorillas should not rely on Hafifu and Majinuni.

Together, the Lion Guard and the gorilla princes set off on their journey to the Theluji Mountains, where King Sokwe and his troop live. Once they reach the base of the mountain range, Kion asks Hafifu and Majinuni how to reach their father, but the brothers admit that they have only come down their mountain once: to deliver Sokwe's message to Simba.

Kion looks instead to Ono for guidance, and he leads them down a path through the trees at the base of the mountains. As the group travels deeper into the woods, Kion questions the gorillas once more on where they should go, but they remain as unhelpful as before. Just then, Beshte spots a chameleon, which prompts Hafifu and Majinuni to launch into a game of "chameleon hide-and-seek," in which they take off into the forest.

The Lion Guard attempts to locate the gorillas, but when their efforts prove unsuccessful, they decide to follow the sound of the brothers' voices. However, the gorillas deliberately circle around the Lion Guard, until Kion realizes their game and yells that the game isn't working. Hafifu and Majinuni decide to change the game to "forest hog chase," in which the Lion Guard has to chase the gorillas as they snort like forest hogs.

With the Lion Guard in pursuit, the gorillas race away into the fog, where they encounter a real forest hog. The Lion Guard rushes to save the brothers, and Kion tackles the forest hog just before it can harm Hafifu and Majinuni. With the danger abated, Kion suggests that they continue up the mountain, but the gorillas try one last tactic to stall the Lion Guard.

The team realizes that Hafifu and Majinuni are deliberately prolonging the journey and confront the gorillas over the matter. The brothers admit that they had originally agreed to deliver the message in order to prove to their father that they are good prince material, but now that they've failed, they don't want to disappoint him. Kion admits that he sometimes feels the same way about his father, and encourages the brothers to act like princes so that they feel like princes.

The journey continues, and the Lion Guard arrives at the foot of the Theluji Mountains. To their shock, they see the landscape covered in snow, a substance that they have never encountered before. Hafifu and Majinuni encourage the Lion Guard to play with them, and Kion allows the team a brief break in the snow. During the festivities, Bunga constructs a giant snow ball for his adoptive uncle, Timon.

Just then, Kion slips on a steep patch of ice and begins to slide down the mountain toward a perilous drop-off. Just before he can fall off, he manages to grapple the edge of the cliff with his claws, and the gorillas pull him to safety. After the rescue, Kion thanks them for saving his life and tells them that their bravery makes for good prince material.

The group continues on their journey until they meet the brothers' father, King Sokwe, who questions his sons on their activities. Though Sokwe initially appears to be displeased, he suddenly throws snow over his sons' heads and exclaims, "Kuishi ni kucheka!" He then compliments the two for their bravery in saving Kion's life and tells them that they are true gorilla princes.

Kion interjects to ask about Sokwe's message for Simba, but Sokwe instead focuses on the snow ball that Bunga has collected for his uncle. Kion wonders if the souvenir is a problem, to which Sokwe replies that the snow ball is perfect.

When the Lion Guard returns to the Pride Lands, they report back to Simba at Pride Rock. Simba prompts the Lion Guard to relate Sokwe's message, to which Kion says, "Kuishi ni kucheka," as Bunga throws a snow ball over Simba's head. Instead of being angry, Simba laughs and comments that no one delivers a peace message quite like King Sokwe. 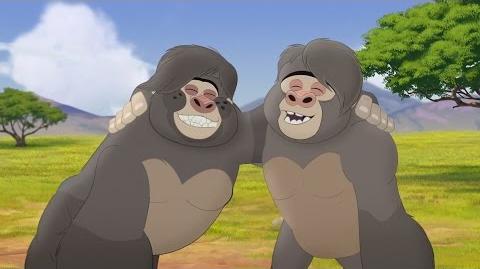 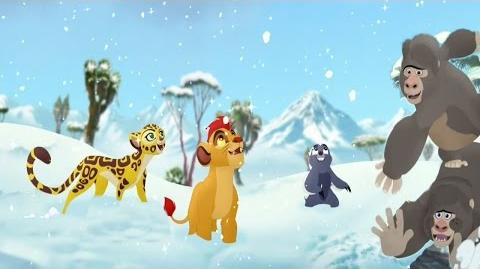 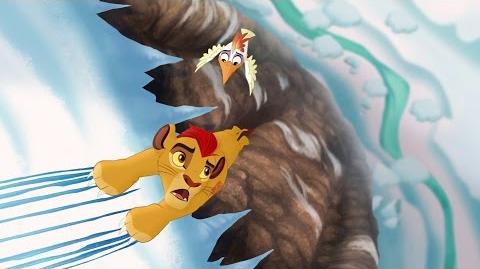 Retrieved from "https://lionking.fandom.com/wiki/The_Lost_Gorillas?oldid=229531"
Community content is available under CC-BY-SA unless otherwise noted.