The Lion in the Moon

"The Lion in the Moon" is a deleted song from an early draft of The Lion King. It is sung by Sarabi to her young son, Simba, after he and his friend Nala escape a clan of hyenas. Sarabi calms her son with a lullaby about a spirit lion that watches over them from the heavens. This song is a tender lullaby version of "Circle of Life."[1]

Mufasa escorts his son, Simba, home after the cub has a frightening encounter with a clan of hyenas. Simba, ready for sleep, still has the hyenas on his mind, and Sarabi calms him. Then, in the distance, a hyena yips. Simba jumps up, on guard, but Sarabi reassures Simba that he has nothing to fear.[2] 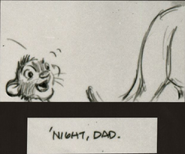 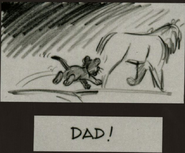 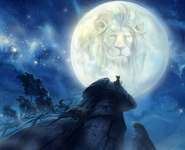