The Lion King 1½ (also known as The Lion King 3: Hakuna Matata in some countries outside the United States) is a direct-to-video part prequel/part parallel (or "in-between-quel" according to the film's teaser trailer) animated film to 1994's The Lion King, made by DisneyToon Studios. The movie focuses on the meerkat/warthog duo Timon and Pumbaa before they met the young lion Simba and how Simba lived with them.

As the original 1994 film was based partially on the Shakespearean play Hamlet this movie is highly suspected to be inspired by Rosencrantz & Guildenstern Are Dead, a play that created a humorous back story for two minor characters from Hamlet.

The film begins with Timon and Pumbaa viewing the opening act of the original film The Lion King in a dark movie theater when Timon suddenly uses a remote control to fast forward to where they appear in the film. Pumbaa argues that the film shouldn't go out of order, and attempts to rewind the film back to the beginning. After arguing back and forth, Timon decides to show Pumbaa his backstory where he lived in a meerkat colony far away from Pride Rock.

Timon was one of the worst diggers underground. While his mother has always been sympathetic and encouraging of Timon, his Uncle Max is more skeptical and embarrassed by his nephew. Timon's mother convinces Uncle Max to give Timon a job as sentry. The job results in disaster when Uncle Max narrowly escapes being eaten by the three hyenas Shenzi, Banzai and Ed. Timon loses the little respect he had from is colony and leaves, hoping to find his place in the world.

On his journey, Timon meets Rafiki who tells him that he seeks "Hakuna Matata" and tells him how to get there. Timon mistakes Rafiki's words of wisdom as an actual place located at Pride Rock.

Along the way, Timon and Pumbaa meet for the first time. Unfortunately, Timon was scared of predators which made Timon and Pumbaa scream loudly when they bump into each other. The adventures of Timon and Pumbaa begin to coincide with the events of The Lion King at this point. When they walk through the herd of animals witnessing the presentation of the new-born Simba, Pumbaa becomes a victim of his demophobia-triggered flatulence problem and the terrible smell makes a few animals collapse. The animals at the front see this and believe that the fallen animals are bowing, and soon, they all bow together, too.

Timon and Pumbaa continue their journey and find a new home near Pride Rock. One morning, they are disturbed by some noise from outside, which is actually Simba, Nala, Zazu, and the animals singing "I Just Can't Wait to be King." Timon gets mad and hits the leg of an elephant supporting the tower of animals. The elephant jumps in surprise and causes the tower to collapse, explaining why it collapsed in the original film. Timon and Pumbaa's home is ruined by this event and they set off to find another home. On the way, they travel to the Elephant Graveyard and witness Mufasa saving Simba, Nala and Zazu from the hyenas. That night, going further into the graveyard, they witness an army of hyenas marching to "Be Prepared," and the duo run away.

Later, they end up in the gorge only to encounter a wildebeest stampede, which is the same one from the original film where Simba loses his father. In the midst of it all they fall down a waterfall and, just as Timon is about to give up, find themselves before a large, luscious empty jungle in which they make their new home. Later, they find Simba and the film shows us some of their life in the jungle throughout the years.

As an adult, Simba re-encounters his childhood friend Nala, and Timon and Pumbaa try everything to stop Simba from falling in love with her. This has disastrous results, although explaining a few things not touched in the original film: Simba and Nala fell off the cliff because Timon and Pumbaa tripped them with a vine; and Timon and Pumbaa re-appear at the end of the "Can You Feel the Love Tonight" sequence at another place because they were running around trying to interfere with the lions during the song. Although they fail, Timon is happy when he notices Simba arguing with Nala and running off to the grasslands. They go back to sleep, mistaking Mufasa's ghost appearing in the clouds as bad weather.

However, in the morning, they realize that Simba has returned home to challenge Scar. Pumbaa follows after Nala and Simba, leaving Timon alone. Rafiki appears before Timon but before he can say anything, Timon realizes that his "Hakuna Matata" is all about his friends, not his home. Timon catches up with Pumbaa and together they head to Pride Rock. There, Timon re-encounters his mother and Uncle Max for the first time at Pride Rock, since he left the colony. They battle the hyenas while Simba fights with Scar. Thanks to Timon's quick thinking, the hyenas roll down a tunnel just in time to meet Scar after he is defeated and thrown from Pride Rock by Simba, into the burning flames below. After the defeat of Scar, Simba becomes the new king, thanking Timon and Pumbaa for all their help. Timon tells his mother that he found his place but something is still missing – his family. In the end, Timon and Pumbaa return to their jungle paradise, bringing Timon's entire meerkat colony with them. The meerkats now have a safe, work-free, predator-free place to call home and Timon is hailed a great hero.

When the film is over, Pumbaa says he wants to watch it again, but Timon refuses to. However, Timon's mother, Uncle Max, Simba, and Rafiki suddenly arrive and request to watch the film as well. They are then joined by numerous Disney characters, first by Mickey Mouse, then Snow White and her seven dwarfs, and so on. Timon gives up and begins to replay the film. Right before the credits roll, Pumbaa says that he's still not used to crowds.

In April 2000, it was announced that the Walt Disney Company selected Jeff Ahlholm, Colin Goldman, and Tom Rogers to write the script for The Lion King 3. It was scheduled to arrive in video stores sometime in 2001.[1] In May 2003, it was announced The Lion King 1½ will be scheduled for home video release in early spring 2004 with Nathan Lane, Ernie Sabella, and Matthew Broderick reprising their original roles, and Elton John and Tim Rice returning to compose a new song, "Meerkat Rhapsody".[2]

Upon its initial release, The Lion King 1½ was accompanied by with a marketing campaign tie-in with McDonald's with six Happy Meal toys including Simba, Rafiki, Timon, Pumbaa, Mufasa and Ed.[3]

In May 2003, the DVD edition was confirmed to include music videos, deleted scenes, behind-the-scenes views of how the movie was made, and two featurettes: Timon -- The Early Years; a mockumentary tracing Timon's childhood through tongue-in-cheek interviews with family and friends; and Disney's Funniest Moments, highlighting Disney animated characters from the Seven Dwarfs to Brother Bear. Two games also will be including a virtual safari backlot tour through the Pride Lands ride and a Lion King trivia game in the format of Who Wants to Be a Millionaire titled Who Wants to Be King of the Jungle?, hosted by Meredith Vieira, then-host of the current U.S. syndicated version.[2] In February 2004, more than 3 million copies of its VHS and DVD units were sold in its first days.[4] That same month, Variety reported the film sold about 2.5 million out of 3.1 million copies before its first weekend on DVD generating about $55 million in its first three days of release.[5] A DVD boxed set of the three Lion King films (in two-disc Special Edition formats) was released on December 6, 2004. In January 2005, the film, along with the sequels, went back into moratorium.[6]

The Lion King 1½ was first released on Blu-ray in a The Lion King Blu-ray trilogy on October 4, 2011. It received its separate Blu-ray release on March 6, 2012, just like The Lion King II: Simba's Pride. It was produced in two different packages, a 2-disc version with Blu-ray and DVD, and a DVD edition. The release has also been attached with a new Timon & Pumbaa short, in which they gaze at the night sky as the star constellations resemble their favorite meal: grubs.[7]

Blu-ray cover for The Lion King 1½

Digital cover for The Lion King 1½

The film received positive reviews from critics. On Rotten Tomatoes, the film holds a 76% approval rating based on 17 reviews, with an average rating of 6.4/10.[8]

Frank Lovece of TV Guide gave the film 3½ stars out of 4 stating that "This retelling of THE LION KING (1994) from the point of view of comic sidekicks Timon (voice of Nathan Lane) and Pumbaa (Ernie Sabella) is one of the rare Disney direct-to-video sequels worthy of the original." He went on to say that 'the only aspect of the film that feels forced is the revisionist positioning of Timon as young Simba's step-dad, which has no emotional echo in the first film. The quality of the animation is surprisingly impressive; some static backgrounds are the primary concession to a small-screen budget and the fluid character movements and expressions are vastly superior to those of, say, the Timon and Pumbaa TV cartoon series.'"[9] Joe Leydon of Variety gave the film a positive review, writing "toddlers and preschoolers will be equally enchanted and amused by colorful toon shenanigans."[10]

The film soundtrack The Lion King 1½: Songs From Timon and Pumbaa's Hilarious Adventure was released to CD by Disney Records on February 10, 2004. It includes two songs from the film: "That's All I Need," re-performed by Nathan Lane as Timon, and "Digga Tunnah." The rest of the soundtrack includes various R&B tracks, including remakes of the Kool and the Gang classic "Jungle Boogie" by The French, and two instrumental pieces from Lion King 1½ composer Don L. Harper. The theme of The Good, The Bad, and the Ugly composed by Ennio Morricone also appears on the soundtrack. 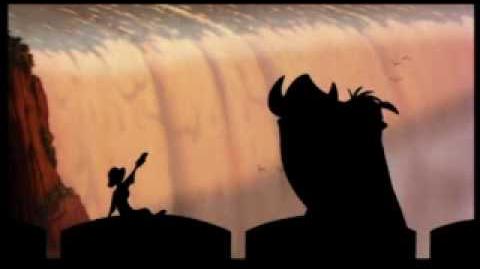 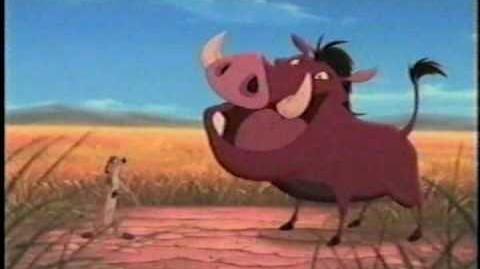 Behind The Legend Timon
Behind the Legend: Timon