The Lion King's Timon & Pumbaa (also known as simply Timon & Pumbaa) is an American animated spin-off television series inspired by The Lion King that aired from September 8, 1995 – September 24, 1999 and was produced by Walt Disney Television Animation. It aired on Fridays and later Mondays on the syndicated block The Disney Afternoon, with new episodes airing on Saturday mornings on CBS.[1][2] The series later reran on Disney Channel, Toon Disney, and Disney Junior.

It features Timon and Pumbaa as the main characters, as they venture beyond Pride Rock spreading their problem-free philosophy, Hakuna Matata.[3] Rafiki, Zazu, and the hyena trio are also given their own segments occasionally.

The Lion King's Timon & Pumbaa follows Timon, a meerkat, and Pumbaa, a warthog, both characters from the Disney animated film The Lion King. Taking place after the events of the original film[4] (and the 2004 direct-to-video film The Lion King 1½), the characters live their Hakuna Matata lifestyle, as they are seen having (mis)adventures in the jungle as well as across the globe in various settings, such as Canada, the United States, France, and Spain.

The episodes are usually split into two 11-minute segments. "Once Upon a Timon" and "Home is Where the Hog Is" are the only half-hour episodes of the series, being considered two-part specials. Occasionally, a music video is featured after the second segment of an episode during the first season, making said episode consist of three segments. The music video segments include "The Lion Sleeps Tonight", "Yummy Yummy Yummy", and "Stand By Me".

After Season 2, the show was originally cancelled due to Disney purchasing ABC. However, in 1998, Disney ordered a 39-episode third season due to overseas demand. For this season, the show had a new set of writers and directors and was produced by the Canadian animation studio Studio B Productions for Walt Disney Television Animation. The episodes now open with the same title card artwork that is used in "Catch Me if You Kenya" and the Timon & Pumbaa logo that usually appeared at the frame is gone. These episodes premiered in the United States on the now-defunct Toon Disney in 1999.

On January 24, 1995, it was announced that a Lion King television series starring Timon and Pumbaa was set to premiere during the fall, as part of The Disney Afternoon.[5][6] Gary Krisel, who was then president of Walt Disney Television Animation, found Timon and Pumbaa to be the best new comedy team to come on the scene for a long time and that they had the potential to be just as classic as Abbott and Costello, Hope and Crosby, Martin and Lewis, and Nichols and May.[6]

For the first two seasons, Bobs Gannaway and Tony Craig served as the show's executive producers. As of Season 3, the series was produced by Chris Bartleman and Blair Peters, with Tedd Anasti and Patsy Cameron serving as the executive producers. Gannaway stated that he and Craig wanted to expand on Timon and Pumbaa's personalities as a comedy team to keep the series fresh and to keep the show interesting, they decided to not have Timon and Pumbaa be locked into the Serengeti, but allow them to explore the world and meet different kinds of animals.[7]

According to one of the show's writers Kevin Campbell, at the beginning of the series, he and Gannaway made a giant list of puns using country names to open the doors on how many places they could go. After figuring out which funny animal or obstacle situation Timon and Pumbaa would face, they used a "Which Animals Live Where" atlas reference book to find where in the world an episode could take place and check a list of country puns they could pick.[2]

Upon its premiere, Timon & Pumbaa was accompanied with a marketing campaign, which included tie-ins with Burger King, KFC, and SpaghettiOs.[8][9][10]

The first two seasons of the show aired simultaneously on The Disney Afternoon and CBS, whereas the third and final season aired on Toon Disney. Reruns of the series aired on Disney Channel from 1997 to 2000 and later from 2006 to 2008. Reruns were shown on Toon Disney up until the channel's demise on February 8, 2009. As a result, the show went off the air for three years.

On March 23, 2012, the show returned to television when Disney Junior was launched as its own channel. However, only selected episodes were shown and some episodes were abruptly edited (presumably due to scenes being deemed inappropriate for preschoolers). As of 2014, the show was removed from the channel.

On January 21, 2017, Timon & Pumbaa was one of the shows presented to celebrate the 20th anniversary of Disney Channel France.[11]

Six VHS cassettes containing 18 episodes of the series were released in the United States under the name Timon & Pumbaa's Wild Adventures.

Three VHS cassettes containing 21 episodes of the series were released in Europe and Australia.

As of November 12, 2019, the series has been made available in its entirety on Disney+, in remastered HD format.[12]

In 2015, the episode "Don't Be Elfish/Lights, Camera, Traction" was presented on Disney Channel on Demand and WatchDisneyChannel.com, as part of Disney Channel Fa-la-la-lidays.

The first two seasons of the show were made available on the DisneyLife streaming service in the United Kingdom.[13]

The entire series is currently available for purchase on Amazon Instant Video in Germany.[14]

Some of the show's crew returned for The Lion King II: Simba's Pride, The Lion King 1½, and The Lion Guard. Show writer and production secretary, Ford Riley, not only went on to develop the latter, but has since been a series creator, writer and lyricist on many Disney properties.[15] Kevin Schon, who voiced Timon in the series as of its second season, reprised his role as the character in The Lion Guard (as well as its pilot film), along with some other related media, such as House of Mouse. Edward Hibbert continued to voice Zazu in the two direct-to-video follow-ups to The Lion King.

Much of the show's crew (including executive producers Tony Craig and Bobs Gannaway) went on to work on House of Mouse and Leroy & Stitch. The Timon and Pumbaa-centric episodes of the former and the duo's cameo in the latter most likely served as tributes to the show. 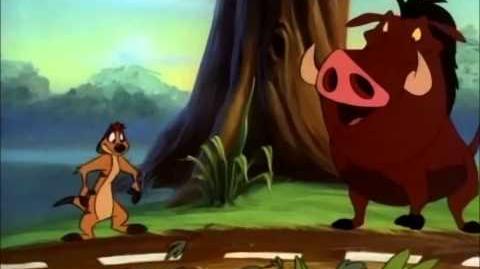 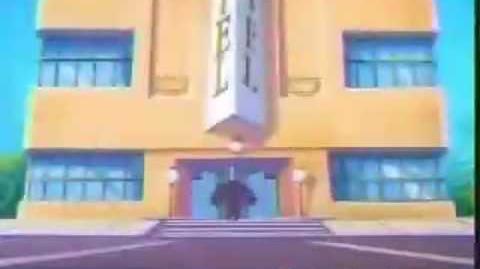 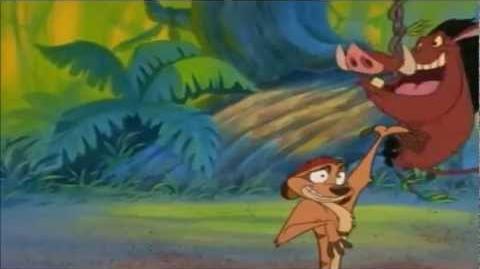 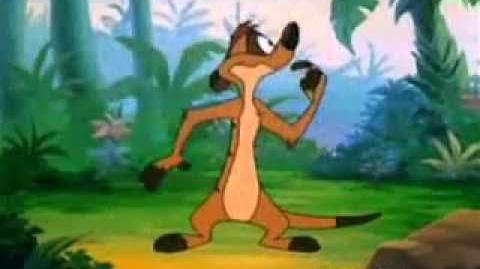 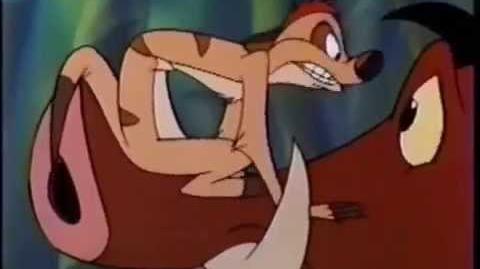 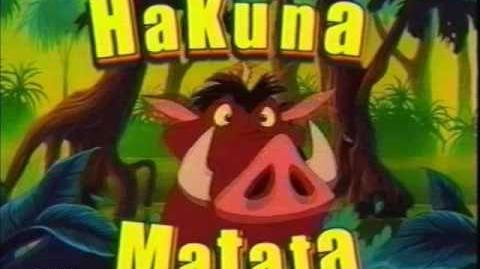 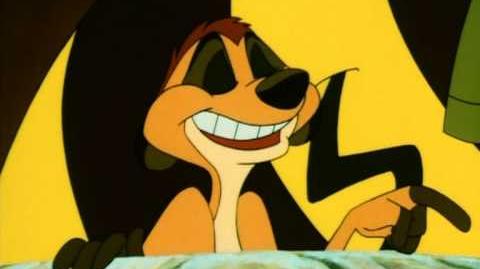 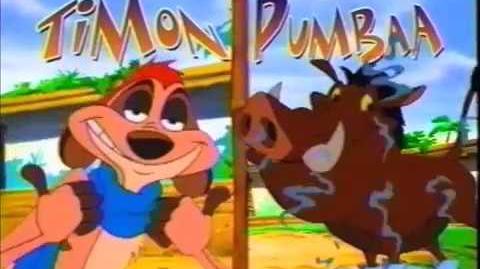 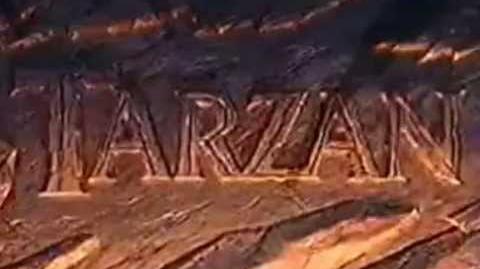 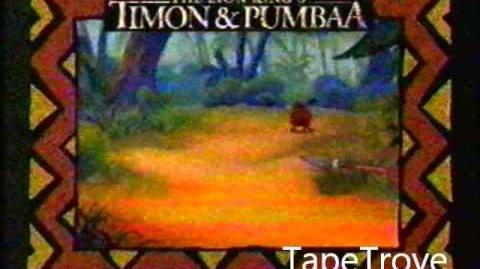 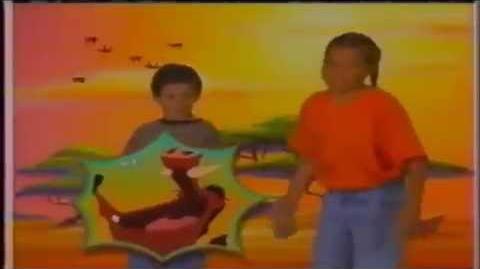