"The Kilio Valley Fire" is the nineteenth episode of Season 2 of The Lion Guard. It aired on April 4, 2018.

"When Scar's minions set fire to the Kilio Valley, the misplaced elephants are forced to the Pride Lands and create chaos amongst the other herds."[1]

In Kilio Valley, the Lion Guard struggles to put out a widespread brush fire. At first, the team believes the fire to be put out, but then embers begin falling from the sky, reigniting the valley. The Lion Guard spreads out, accepting help from several of Ma Tembo's herd members, while Ma Tembo leads the rest of the herd out of the valley. However, she is cornered among the flames by Janja, Reirei, Kiburi, and their respective followers.

Ono overhears Janja's cackling and reports what he's heard to Kion, who suspects Scar of causing the trouble. He then orders his team to protect the elephants, leaving Kilio Valley to the mercy of the fire.

Just in time, the Lion Guard arrives to protect the elephants, but they find themselves outnumbered and hemmed in by flames. Ono quickly pinpoints a safe route out of the valley, which Beshte clears, while Bunga and Fuli protect the herd. The Lion Guard then leads Ma Tembo and her herd out of the blazing valley.

Once to safety, Ma Tembo mourns her destroyed home. An ornery member of her herd, Zito, blames the Lion Guard for failing to save Kilio Valley, to which Kion guiltily accepts the criticism. Ma Tembo turns to Kion for help in finding a temporary home, and he resolves to help the elephants.

Back in Kilio Valley, the fire dies down as the Army of Scar celebrates their victory. They begin to bicker among themselves, arguing over who had performed the best, when Scar suddenly arises from a still-burning ember and orders the army to remain in Kilio Valley. He then reveals that he plans to take over the Pride Lands piece by piece.

Across the Pride Lands, Kion leads the elephants to Ndefu Grove, the home of the galagos. At first, Laini is receptive to the elephants staying in her home, but once their heavy plods start making the ground shake and causing galagos to fall out of trees, she appeals to Kion to take them elsewhere. Kion makes two more attempts to find the elephants a home - once with the Twiga and her giraffes and again with Bupu and his sable antelope - but both end in the herd leaders refusing to put up with the elephants' behavior.

Frustrated, Kion orders Bupu to be patient with the elephants until the Lion Guard can come up with another solution. He then asks Ono for a report on Kilio Valley. Ono does as he is instructed and informs Kion that Scar's army has remained in the valley. A guilty Kion realizes that he has helped enable Scar's plan to take over the Pride Lands.

In Kilio Valley, Janja attempts to appoint himself leader of the army, but Kiburi, Mzingo, and Reirei protest vehemently. The villains then begin singing "I'm Gonna Run This Dump", in which they compete over who should be in charge of the valley.

In the meantime, the Lion Guard discovers that Ma Tembo has been forcibly outed by Bupu. Kion approaches the herd and assures Ma Tembo that he will find them a new home, but Ma Tembo insists that they must leave the Pride Lands, as no one else wants them.

Just then, Ono alerts Kion to a new fire that has broken out at Ndefu Grove. The Lion Guard rushes to the grove, where Laini begs them to save her galagos. Bunga, Fuli, and Kion quickly pinpoint the galagos, who are trapped in a tree, and save them from the flames. However, as they are delivering them safely back to Laini, Beshte informs them that the fire is not being put out fast enough. Kion resolves to find help, while the rest of the Lion Guard stays behind to combat the fire.

Kion races across the Pride Lands to where Ma Tembo and her herd are still en route to another kingdom. He explains the situation to her, and she agrees to help the galagos, as she considers the other Pride Landers her family. Zito, however, refuses to help, staying behind to look after the mothers and their calves.

With Kion and Ma Tembo in the lead, the elephants arrive in Ndefu Grove, where they promptly put out the fire. In the midst of the chaos, a tree nearly falls on Kion, when Zito suddenly appears and catches it on his back. Kion is delighted at Zito's change of heart, and Zito explains that he should not turn his back on his family.

After the fire is put out, Laini thanks the elephants for their help and offers them a place in Ndefu Grove. Ma Tembo gratefully accepts, but laments the loss of Kilio Valley. Kion promises her that they will retake her home, to which Ma Tembo states that while Kilio Valley is just land, the Pride Lands is home. 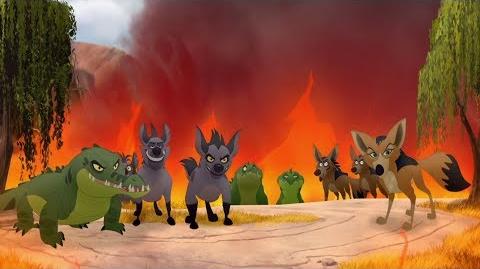 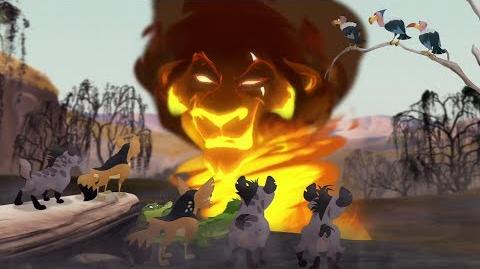 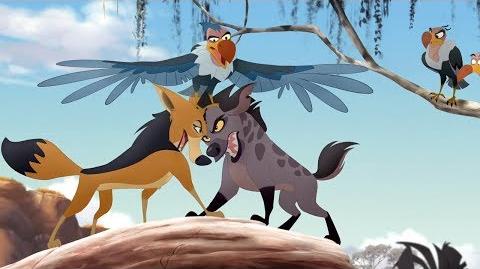 Retrieved from "https://lionking.fandom.com/wiki/The_Kilio_Valley_Fire?oldid=287256"
Community content is available under CC-BY-SA unless otherwise noted.