"The Imaginary Okapi" is the fourteenth episode of Season 1 of The Lion Guard. It aired on July 8, 2016.

"When Beshte befriends a shy okapi, an animal that looks like a cross between a zebra and a giraffe, the other Lion Guard members think Beshte has an imaginary friend."[1]

"The Imaginary Okapi" begins by introducing Kion, the leader of the Lion Guard, and his friends, Beshte, Bunga, Fuli, and Ono. At the start of the episode, the friends are playing hide-and-seek in order to improve their tracking skills. During one such game, Beshte hides in a bush, where he encounters an okapi named Ajabu. The two introduce themselves, and Ajabu explains that he is from a land far away, where okapi are forced to live in hiding from dangerous leopards. Beshte assures Ajabu that there are no leopards in the Pride Lands and sings "Life in the Pride Lands" to him, in which he gives Ajabu a tour of the kingdom.

Meanwhile, the Lion Guard is still playing hide-and-seek, unaware that Beshte is missing. While playing, Fuli spots leopard tracks, and the team traces the leopard to where he is stalking a herd of gazelles. The Lion Guard attempts to chase him off, but the leopard simply introduces himself as Makucha and declares that the team will have to catch him first. Fuli leads the team in pursuit, but Makucha escapes by jumping across Big Ravine.

After Makucha gets away, the Lion Guard resolves to stop him, since no one in the Pride Lands knows that leopards are hunters. Kion starts to break his team up into groups, but realizes that Beshte is still in hiding. Bunga and Ono volunteer to find him and soon spot him overlooking the plains. A delighted Beshte starts to introduce them to his new friend, Ajabu, but the okapi disappears before his eyes. Beshte tries to explain that Ajabu is half-giraffe and half-zebra, but Bunga and Ono theorize that Beshte has made up an imaginary friend.

Just then, the rest of the Lion Guard shows up, and they set out in search of Makucha. As the team is searching, Beshte catches sight of Ajabu and leads the team in a frenzied chase across the Pride Lands. When the chase ends in failure, Bunga and Ono criticize Beshte for trying to make them believe in such an unbelievable animal. Hurt, Beshte walks off by himself, and Kion chides Bunga and Ono for hurting their friend's feelings. Bunga and Ono see the wisdom in Kion's words, and they apologize to Beshte, proclaiming that they believe him now. With Beshte's feelings amended, the team sets out in search of Ajabu so that they can warn him about Makucha.

Unbeknownst to the team, Ajabu has worked up his courage and introduced himself to a herd of zebras. While grazing with the herd, Ajabu catches sight of Makucha and races away in a panic. Makucha attempts to catch Ajabu, but he is delayed by the zebras, whom he refuses to eat in favor of tracking down Ajabu.

The cries of the zebras alert the Lion Guard to the situation, but they arrive too late to spot Ajabu. After noticing that the zebras have been left unharmed, Kion theorizes that Makucha is after Ajabu alone, and the team vows to protect the okapi from harm. Just then, Ajabu races past with Makucha hard on his hooves, and the team takes off in pursuit. Together, they force Makucha to leave the Pride Lands, and the leopard departs in search of easier prey.

With Ajabu safe, Beshte introduces his friends to the okapi, who marvels at Bunga, for he hadn't believed that honey badgers could exist. Beshte wonders what Ajabu will do next, and the okapi admits that he must return home, even if Makucha is waiting for him there. Suddenly, Kion gets an idea, and he brings Ajabu before his parents, Simba and Nala, who allow the okapi to take up residence in the Pride Lands.

To celebrate Ajabu's new status as a Pride Lander, the Lion Guard decides to play hide-and-seek with him. No sooner have they made this suggestion when Ajabu disappears, and Bunga comments that he is quite good at disappearing. 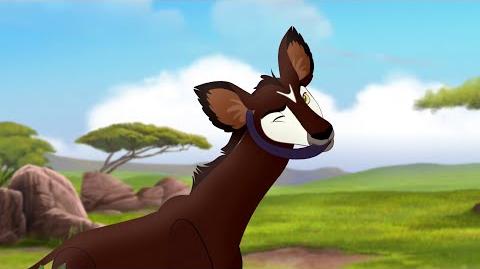 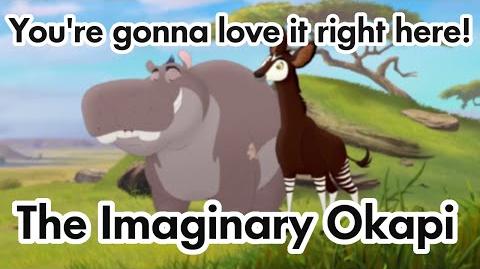 The Lion Guard The Imaginary Okapi Song! You're gonna love it right here LYRICS
The "Life in the Pride Lands" musical sequence 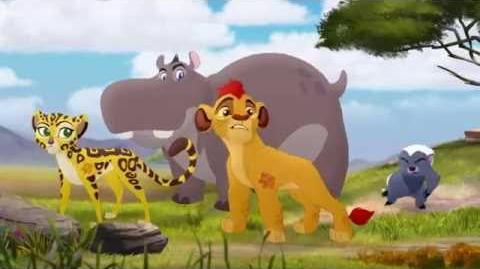 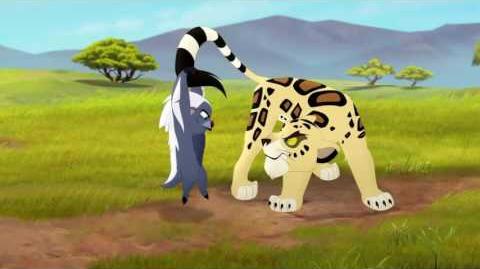 Retrieved from "https://lionking.fandom.com/wiki/The_Imaginary_Okapi?oldid=287253"
Community content is available under CC-BY-SA unless otherwise noted.