The Great Festival of the Sun is a comic inspired by The Lion King. It was published strip by strip from November 28, 1994, to December 24, 1994, in American newspapers.

Rafiki announces that the solstice is nearing, and Mufasa proclaims that they must begin preparing for the sun holiday. Simba questions his father as to what the sun holiday is, to which Mufasa explains that it is the longest day of the year. He then entrusts Simba with the task of preparing for the ceremony, with Zazu supervising to make sure Simba does not do anything foolish. Meanwhile, Mufasa's brother Scar stews over Simba's temporary leadership role.

As the day goes on, Simba and Zazu make preparations for the holiday. When they finally finish, Rafiki praises Simba for doing a good job and offers to bring Mufasa to look over the finished product. However, Simba implores Rafiki to wait, as there are still details for he and Zazu to work out.

Scar watches Simba's success from afar and worries that it will only convince Mufasa that Simba is suitable to be king. He employs the help of his hyena minions, Shenzi, Banzai, and Ed, to destroy the site of the ceremony.

Across the savanna, Zazu warns Simba that he had seen a hyena skulking about the area. Just then, Mole appears with a summons from Mufasa. In the meantime, Scar orders his minions to block up the river so that the water floods the ceremony site.

As the hyenas go to work, Simba hears a suspicious noise. Together, he and Zazu return to the site of the ceremony, where floodwaters are ravaging all of Simba's hard work. Simba and Zazu lament the situation, while Scar watches in pleasure from the sidelines. Zazu happens to notice Scar and blames him for the disaster, but Scar simply assigns blame to Simba and adds that Simba is not fit to become king.

A disheartened Simba laments the disaster, but Rafiki encourages him to keep thinking. Simba then gets an idea. He leads the Pride Landers to the flood, and they begin to play in the water, praising him for having such a unique idea. A furious Scar falls into the water, but pretends to simply be bathing. 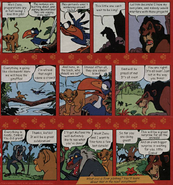 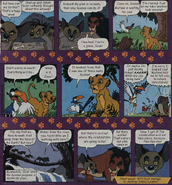 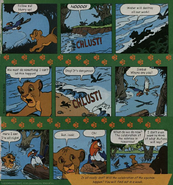 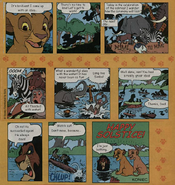 Retrieved from "https://lionking.fandom.com/wiki/The_Great_Festival_of_the_Sun?oldid=218861"
Community content is available under CC-BY-SA unless otherwise noted.