"The Lion Guard steps in when they encounter a deceptive drongo bird named Tamaa who mimics predators to scare off smaller animals."[1]

"The Call of the Drongo" begins by introducing Kion, the prince of the Pride Lands, and his friends, Beshte, Bunga, Fuli, and Ono. At the start of the episode, the five friends are alerted to the presence of three predators: Makuu the crocodile, Goigoi the jackal, and Janja the hyena. The animals who've overheard these vicious predators rush up to Kion, begging him for help, and the Lion Guard sets out to stop the trouble.

While Kion attempts to find Janja, Beshte and Bunga search the river bank for Makuu, and Fuli and Ono track down Goigoi. Despite sniffing around the sites of the incidents, the Lion Guard fails to yield any results, save for the thievery of the victims' food. A confused Kion presses the animals for more information, and he discovers that Goigoi, Janja, and Makuu had all said the same thing to their victim.

Just then, the Lion Guard overhears Janja, and they follow his voice to where a drongo named Tamaa sits perched in a bush. The Lion Guard presses him for information, and the bird points them in the right direction. However, as they're following Tamaa's instructions, Ono suddenly instructs the Lion Guard to turn back.

Once they've returned to Tamaa, they witness him mimicking Janja's voice in order to scare off a hyrax. A furious Kion confronts him for his wrongdoing, and Tamaa admits that he's been the one scaring off animals in order to steal their food. He then sings "Bird of a Thousand Voices" to explain his talent to the Lion Guard. Despite Tamaa's impressive skill, Kion remains unimpressed and makes Tamaa promise to only use his own voice from now on.

No sooner has Tamaa made his promise when the Lion Guard overhears the real Janja chasing down a herd of impalas. They race to the rescue and put a stop to the hyena's schemes, forcing Janja and his cronies, Cheezi and Chungu, back into the Outlands. Meanwhile, Tamaa attempts to kindly ask animals for their food, but his efforts prove futile.

Frustrated and hungry, Tamaa resorts to using his voice once more to steal from innocent animals, but Janja happens to overhear him and corners him in a bush. Tamaa begs the hyenas not to eat him, and Janja assures him that he has other plans for the drongo. Sure enough, Janja forces Tamaa to imitate Kion's voice and send a herd of impalas into the Outlands. The plan works, and the hyenas hold Tamaa captive as they follow the herd into the Outlands.

Back in the Pride Lands, the Lion Guard happens across a zebra who is fervently trying to escape danger. Upon being questioned, the zebra reveals that he and the impalas had heard Kion instructing them to go to the Outlands for safety. Suspicious, Kion surmises that Janja is forcing Tamaa to herd impalas into the Outlands for his own satisfaction, and the Lion Guard rushes to put a stop to the danger.

Meanwhile, Tamaa is forced to watch as Janja creeps up on the herd of impalas, who have been successfully herded into the Outlands. With Janja distracted, Tamaa manages to imitate his voice and trick Cheezi into letting him go. Once free, Tamaa imitates the other Lion Guard members and scares Janja and his cronies into a huddle.

However, Janja realizes that Cheezi had let the drongo go, and he corners Tamaa in the ravine. Just in time, the real Lion Guard arrives and chases the hyenas away from Tamaa and the herd of impalas. Together, they escort the impalas back to the Pride Lands, where Tamaa vows to only use his voice for good from now on. After making his promise, Tamaa imitates Bunga's voice as he swoops away. 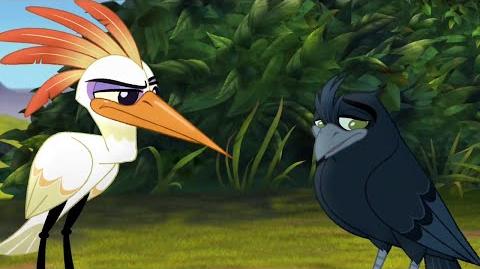 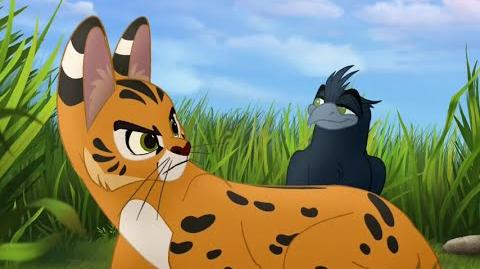 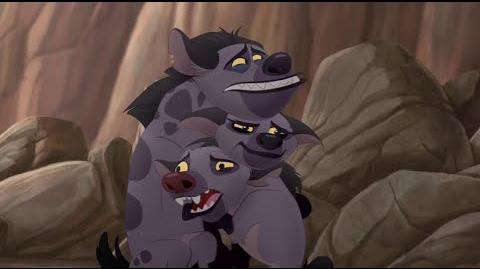 Retrieved from "https://lionking.fandom.com/wiki/The_Call_of_the_Drongo?oldid=229519"
Community content is available under CC-BY-SA unless otherwise noted.