The Brightest Star is a book inspired by The Lion King. It was published in September 1994 by Walt Disney Records & Audio.

Mufasa and Simba are on the top of Pride Rock on a cold winter's eve. Mufasa shows Simba the brightest star in the sky and says that it goes back to the time of Simba's great-grandfather, Mohatu. Mufasa then tells Simba the story of Mohatu.

A terrible drought has gripped the the Pride Lands. The water hole is reduced to a puddle, and all of the grass has dried up and died. Mohatu makes a law about how much each animal can drink. Lions were to go the water hole last, as they could survive a relatively long time without water.

The law works and each animal is able to survive. But one of these days, a selfish and lazy lion sits at the water hole and drinks a large amount of water. The other animals stand nearby waiting for him to finish. Lastly, an antelope approaches him and asks if she can have a drink also. The lion lunges at her, and all of the other waiting animals run in fear.

Mohatu is outraged when the news reaches him, and decides he must find a more permanent solution to the water shortage.

Mohatu walks for many miles. After a while he comes to a large river. After having a drink, he lays down to rest, when suddenly he hears someone sobbing. He goes to investigate and finds a crocodile sobbing in the river. The crocodile is lonely and wants some friends. Nevertheless, everyone is afraid of him, because he once bit Hippo's tail. Mohatu says he will help the crocodile gain the trust of the other animals again.

After Mohatu returns to the Pride Lands, he realizes that all the animals must trust each other so that they can all use the Great River as their water supply.

He tells the animals that no one can harm another until the drought has passed. A zebra speaks up, saying that since the first law wasn't followed and was violated by Mohatu's own kind (the lions), he wants the protection of the wildebeest. Nevertheless, Wildebeest refuses to go, as he doesn't trust the hippos near the river. A hippo testifies and claims the crocodile is the only animal that should be feared. And then, Mohatu shouts to the animals to be silent. The animals begin to debate amongst themselves with Zebra concluding that it is every animal for themselves.

All of the animals run off towards the Great River in a massive stampede. Cheetah runs forward in a burst of speed and tries to overtake Giraffe and Zebra. Zebra kicks Cheetah in the chest and the animals run over Cheetah as they rush forward to try and be the first at the river.

Zebra reaches the river first, racing forward to drink but becomes lodged in quicksand. All of the animals rush forward to try and pull Zebra out, but Zebra is firmly stuck.

Mohatu arrives with Cheetah on his back at last. Mohatu, seeing Zebra stuck in the quicksand, summons Crocodile for help. Crocodile appears and planting himself firmly on the bank, swings out his tail to Zebra. Zebra clamps onto Crocodile's tail and is pulled to safety.

Zebra apologizes to Cheetah for kicking him, and all of the animals drink their share of the water, being cautious to avoid the quicksand. The animals of the Pride Lands return to the Great River over and over again, and Crocodile is constantly kind to them. At last, when the drought ends, King Mohatu still journeys to the river to see his friends Crocodile, Zebra, Wildebeest and Hippo.

Many years pass under Mohatu's kind and polite rule until Mohatu's death one winter's eve. The animals grieve heavily and begin fighting once again. But just as they think that there would never be peace again, a mysterious star appears in the sky. The star is bigger and brighter than any other star. It fills the animals with peace and harmony and the fighting ceases. They know that the star is the spirit of their king. 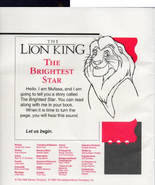 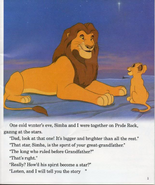 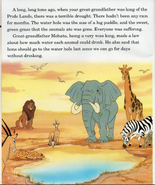 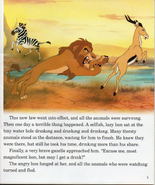 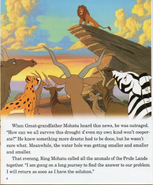 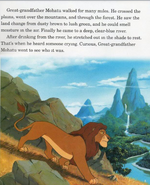 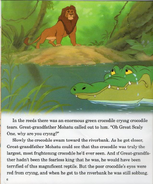 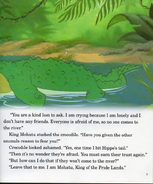 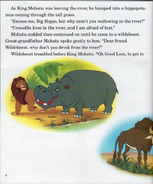 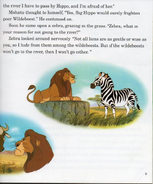 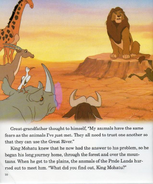 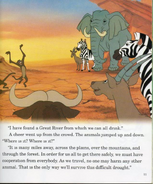 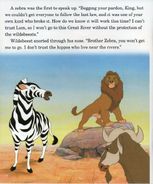 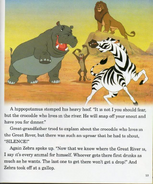 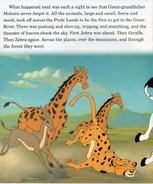 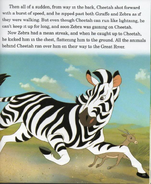 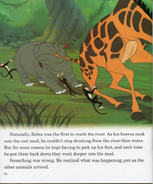 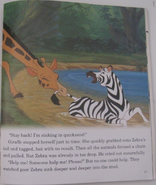 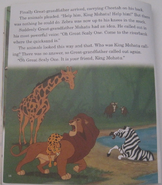 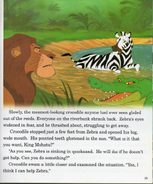 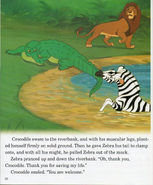 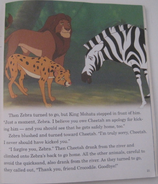 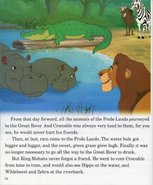 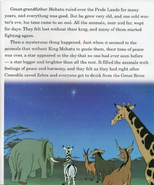 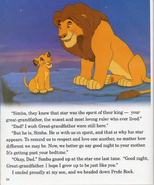