"The Bite of Kenge" is the eleventh episode of Season 2 of The Lion Guard. It aired on November 3, 2017.

"A ferocious monitor lizard named Kenge bites some of the members of the Lion Guard, temporarily paralyzing them. *Kristofer Hivju (“Game of Thrones”) guest stars as Kenge."[1]

The Lion Guard catches Janja and his minions, Cheezi and Chungu, attempting to steal a supply of melons from the elephants, who need the fruits' moisture to survive the dry season. They manage to fend off the hyenas and save most of the melons, but Kion decides to keep his team watching the melon patch to ensure that no more fruits are stolen.

The hyenas return to their den, where they explain the situation to Scar and Ushari. After hearing Janja's story, Scar deduces that destroying the melon supply could offset the Circle of Life, as it would dehydrate the elephants, and orders the hyenas to return to the fruit patch. Janja protests the idea as foolishness, since the Lion Guard is waiting for them there, but Ushari volunteers to connect them with a powerful friend of his who can help them. He then sings "Big Bad Kenge", in which he boasts of his friend Kenge's great speed and deadly bite.

Once back in the Pride Lands, the hyenas meet Kenge for the first time. They are thoroughly intimidated by his massive size and strength, and ask him if he will help them find the Lion Guard. Kenge merely declares that he is going to wait until they find him.

Later that day, Ono spots a skirmish at the Watering Hole, and the Lion Guard arrives to find Kenge making a scene. The team leaps into battle, but Kenge manages to bite Kion, Fuli, and Beshte, paralyzing them. Just in time, Bunga steps in and breaks wind in Kenge's face, causing the lizard and his hyena minions to retreat.

With the danger abated, Ono realizes that Kenge is a monitor lizard and therefore has a venomous bite. The team urges Ono to fetch Rafiki for healing, but when Ono arrives at Rafiki's tree to get help, only Makini is at home. She offers to accompany Ono instead and use her minimal healing skills to assist the Lion Guard. However, once at the scene of the fight, she forgets what the antidote, ponya flowers, looks like. Ono recalls what the flowers look like and manages to locate a patch of them. At the same moment, he sees the hyenas returning to the melon patch with Kenge. Hearing this news, Kion orders Bunga and Ono to deal with the thieves while Makini collects the flowers.

At the melon patch, Kenge quickly assumes authority over the hyenas, ordering them to roll the melons out of the patch. Just in time, Bunga and Ono arrive, with Bunga taking on Kenge while Ono stops the hyenas from stealing the melons. At first, the two seem to succeed in their endeavor, but then Kenge manages to bite Ono on the wing, paralyzing him and effectively removing him from the fight. Bunga attacks Kenge, but is bitten himself, allowing Kenge and his hyena allies to escape with the melons. However, once the danger is over, Bunga realizes that he is immune to Kenge's venom.

Meanwhile, Makini attempts to use the ponya flowers to heal the Lion Guard. At the same time, Bunga arrives and declares that he must face Kenge alone, but the Lion Guard insists that Makini accompany him to the fight. Though reluctant, Makini eventually agrees, and Kion declares that he has a plan as to how they can defeat Kenge and the hyenas.

Bunga and Makini follow Kenge and the hyenas to Embamba Canyon, where Bunga distracts the thieves while Makini steals their melons and hides them behind rocks. While ridiculing his enemies, Bunga stumbles upon Kenge's trigger word, "little." He uses the word to his advantage, spinning Kenge into a fury and causing him to chase Bunga around the canyon. In his attempts to catch Bunga, Kenge accidentally bites Cheezi and Chungu, paralyzing them. He nearly bites Janja when a melon is thrown his way, and he turns his attention to Makini. She throws her bakora staff at him to keep him back, but he simply snaps it in half with his teeth.

Just then, a fully healed Lion Guard approaches. The hyenas attempt to run, but are hindered by their paralyzed legs. Taking advantage of this, Kion uses the Roar of the Elders to blast Kenge and the hyenas back to the Outlands, where the melons are out of their reach. Together, the Lion Guard and Makini roll the stolen melons back to the patch, where Bunga complains that the labor of moving the melons had been worse than taking on Kenge alone. The Lion Guard then shares in a hearty laugh. 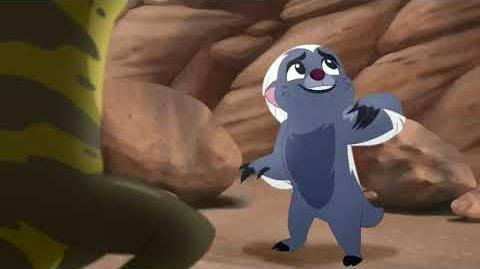 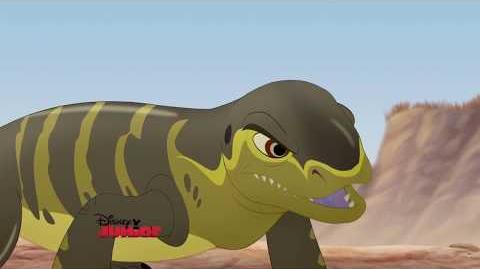 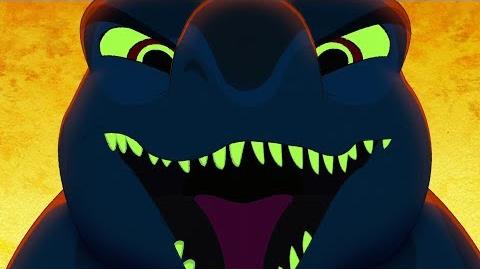 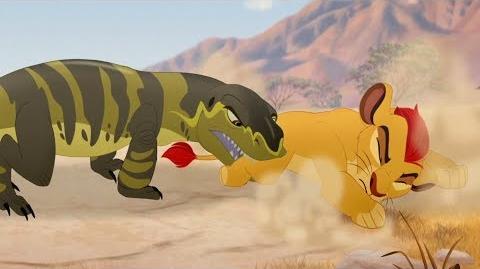 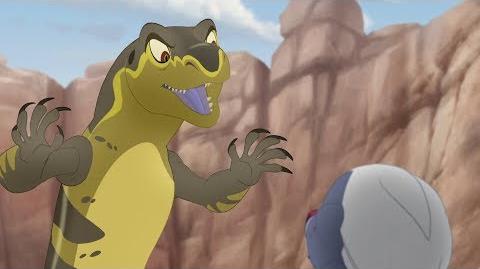 Retrieved from "https://lionking.fandom.com/wiki/The_Bite_of_Kenge?oldid=234188"
Community content is available under CC-BY-SA unless otherwise noted.