Start a Wiki
watch 01:39
The Loop (Movies)
Do you like this video?
The Ancient Outpost is a comic inspired by The Lion Guard. It was published by Panini Comics on July 27, 2017, as part of The Lion Guard Magazine.

Kion leads the Lion Guard to a rarely ventured area of the Pride Lands and explains that a former Lion Guard had once had a shelter there, according to Rafiki. Just then, the ground crumbles beneath him, and he falls onto a ridge below the rest of the Lion Guard.

As the team deliberates how they will save him, Kion notices an opening in the rocks, which is marked by the symbol of the Lion Guard, and enters. Beshte asserts that the cave must have another entrance, and Ono volunteers to find it using his incredible vision.

Kion enters the cave, excited to set foot where no one has been in many years. However, as he travels deeper into the cave, he finds himself face-to-face with several diverging paths. He begins to guide himself through the tunnels using the symbols of the Lion Guard and ignoring those marks placed down to confuse intruders.

The team reconvenes at the entrance of the cave. Just as they are about to set off together, Kion notices another symbol of the Lion Guard and follows it to a ledge that overlooks the Pride Lands. Kion then realizes that this must be the secret of the shelter. 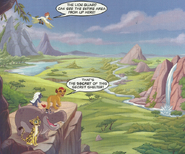 A panel from one of the comic pages
Add a photo to this gallery
Retrieved from "https://lionking.fandom.com/wiki/The_Ancient_Outpost?oldid=218844"
Community content is available under CC-BY-SA unless otherwise noted.