Tama is a lion cub who makes her first and only appearance in Trouble in Paradise. She temporarily replaces Simba as Nala's best friend.

Tama is a lion cub who lived during Mufasa's reign.

Tama is Nala's friend and becomes her preferred playmate when Simba's antics become too annoying. Nala chooses to explore the Hidden Valley with Tama rather than play with Simba, causing Simba to jealously follow after them.

Both cubs agree that the trip is much more fun without Simba, unaware that he has followed them, and enjoy themselves until they hear Simba's cries for help. They run to his aid but quickly head for a tree upon seeing multiple snakes surrounding Simba. A plan is soon formed to assist Simba by bending a light branch down to where he can reach it.

The plan succeeds until the snakes start climbing up, but with the help of Zazu, the cubs make their way up a waterfall and escape. Simba claims that he'd known the place was dangerous from the start, something that annoys both Nala and Tama.

Tama has cream-colored fur that holds a slight tinge of orange. She has orange eyes, a head tuft, and a dark brown tail tuft.

Tama is calm and able to appreciate life, as she's seen welcoming a butterfly that lands on her nose. She is irritable, however, and doesn't like Simba because she finds his antics to be annoying. Tama doesn't seem to hold a grudge, as even though Simba annoys her, she helps him get away from the snakes closing in on him. 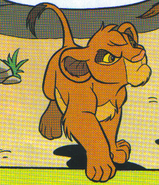 Retrieved from "https://lionking.fandom.com/wiki/Tama?oldid=190157"
Community content is available under CC-BY-SA unless otherwise noted.