"A nature show is being shot in the Serengeti."[1]

As a documentary show titled Kingdom of the Creatures is being filmed in the Serengeti, Martin Partin, the host of the show, introduces an armadillo to the audience, whose name is Dasypus Novemcinctus (better known as simply "The Armadillo"). Martin then shows the armadillo digging a turkey out of the ground. When the host ends the first take, his cameraman, Ron, has doubts about armadillos digging turkeys out of the ground using shovels and other things. But Martin shouts at him by telling him that the armadillo is the star of the show and therefore, he deserves to have steak for lunch.

Shenzi, Banzai, and Ed are watching the armadillo enjoying his meal, wishing that they were given food too. Shenzi states that they should be talented actors in order to have food. Banzai claims that he has talent, but Shenzi states that she is better at being a star than her cohorts.

During the second take, Martin shows how the armadillo protects himself from predators. After the armadillo hides in his shell, Shenzi appears and demonstrates ballet dancing, making Martin yell "cut." Shenzi then asks Martin to give her some steak, but Martin spins the female hyena away. After seeing Shenzi's failure of being a star, Banzai decides to prove to Shenzi that he could be a better actor.

During the third take, while Martin shows what the armadillo does during the rainy season, Banzai performs a singing act. Martin sarcastically praises Banzai for his performance, but then abruptly turns him down like he did to Shenzi. It is now Ed's turn to show his act.

For the fourth take, Martin shows the armadillo not taking himself seriously. Ed then appears, attempting slapstick comedy. However, just like his cohorts, he gets turned down by Martin. The hyenas suggest that they should become directors. Meanwhile, the armadillo gets a movie deal and therefore, leaves. Martin now has to find another animal star, but then, he sees the hyenas walk up to him, making him offer them a job as actors, but the hyenas would rather be directors and they are planning to eat Martin.

With the hyenas as the new hosts of "Kingdom of the Creatures," they make a take (titled "'Next' One" on the clapboard, thus making it the fifth take) with Martin in a cooking pot. 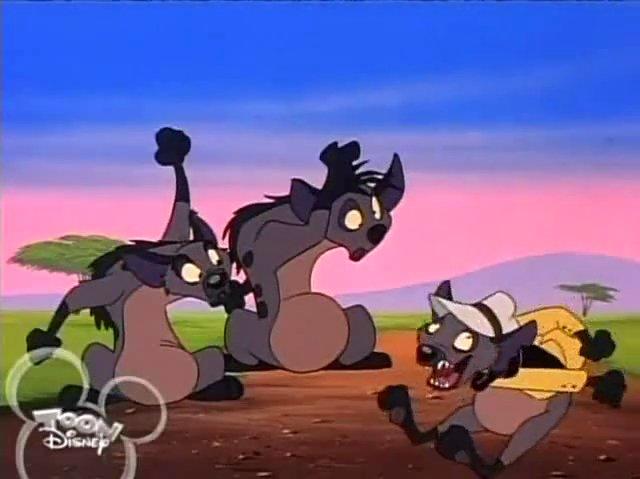 Retrieved from "https://lionking.fandom.com/wiki/TV_Dinner?oldid=296556"
Community content is available under CC-BY-SA unless otherwise noted.