"Swiss Missed" is the second segment of the sixth episode of Season 1 of The Lion King's Timon & Pumbaa. It aired on September 29, 1995 on the syndicated Disney Afternoon block, alongside "How to Beat the High Costa Rica".

"Timon and Pumbaa go to Switzerland."[1]

During a visit to Switzerland, Timon and Pumbaa eat bugs covered in Swiss chocolate. Timon wants to eat his very favorite confection for last, until the nearby clock tower rings nine o'clock and people rush by, almost making Timon drop his chocolate. Timon believes that the people are rushing because they are unable to relax and live the Hakuna Matata life. He claims that he can help anyone adopt the no worries lifestyle, but refuses to do so until one of the villagers directly affects his life in any way.

Immediately after he says this, a window opens, knocking the meerkat down and splattering his chocolate-covered bug on the ground. The young man inside rushes out and takes on his duties of winding the clock. Timon then makes efforts to try to stop the clock winder, named Fronk Fegnugen, from his busyness, but Fronk refuses to stop because his responsibilities affects people other than himself.

Timon insists that something is missing from Fronk's life and that he needs to relax (and kiss a girl). Fronk, however, must still repair the clock. Timon and Pumbaa send Fronk on a vacation to lead a Hakuna Matata life and insist that the clock will be fine without him for a little while. The moment Fronk leaves, the clock malfunctions and the clock inspector, Clockwork Quint, drives up to ensure that Fronk's clock is in excellent condition. Upon not finding Fronk, who took the job Quint desired, Quint issues an order that the clock must be working by noon or Fronk would lose his job working with clocks. Timon tells Pumbaa that they can fix it, but after a number falls from the clock's face, he suggests that they should leave town.

The pals wait at the train station and later, a hot air balloon station, but no one returns to sell them a ticket, because they are relying on the clock's time. Timon finally realizes they need to tell Fronk about the predicament so that the master timekeeper can repair the clock.

They find Fronk skiing in the Alps with his new sweetheart Frieda, who also loves the clock. Fronk and Frieda have great dreams for their future together but Timon and Pumbaa must break the news to him that the clock is in need of repairs and that he is in danger of losing the job to Clockwork Quint. The four quickly ski down the mountain (through a chapel so that Fronk and Frieda can wed) and into the clock tower. Fronk believes the clock is irreparable and blames Timon for making him take a break, but Pumbaa has an idea.

Quint again drives up, believing he will be able to take Fronk's job. However, at the stroke of noon, Timon and Pumbaa perform the jobs of the mechanical animals that were previously on the tower. Quint is enraged by what he saw and angrily leaves, meaning that Fronk can still keep his job as a timekeeper, much to his, Timon, Pumbaa, and Frieda's happiness. 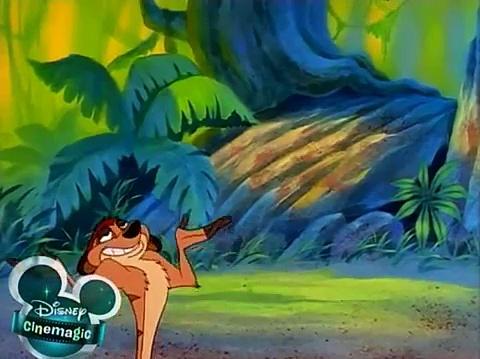