"When Beshte ends up alone in the Outlands, Scar uses the opportunity to attack the Lion Guard's strongest member."[1]

When Thurston the zebra and members of his herd get stuck in a dry riverbed, the Lion Guard arrives to help. Beshte warns the team that they must rescue the zebras quickly, else the sun will dry the mud faster, and Kion decides to use the Roar of the Elders to make a rainstorm to loosen the mud. To the rest of the Lion Guard's shock, the Roar turns a cloud into a thunderstorm, and the falling rain loosens the mud, freeing some of the zebras.

At first, the Lion Guard believes the zebras to be safe, but when the rain refuses to stop and a flood begins to rush down the riverbed, Kion orders Beshte to stop the water flow while he and the rest of the Guard free the stuck zebras. The zebras are brought successfully to safety, but in the midst of the rescue, Beshte is swept away by the impeding floodwaters and finds himself trapped in the Outlands.

In the Outlands, Beshte begins to suffer under the intense heat and desperately searches for shade, singing "Look on the Bright Side" as he goes. Unbeknownst to the hippo, Shupavu the skink and her followers are tracking his progress.

In the meantime, the Lion Guard continues to follow the dry riverbed. Ono attempts to search for Beshte from above, but to no avail, and the team worries over Beshte's safety under the intense heat of the sun.

Back in the Outlands, Beshte meets Shupavu and her fellow skinks, believing them to be well-intentioned creatures. He admits his worries about the sunlight, and Shupavu offers to lead him to an area of shade. Beshte agrees, and the group departs.

At the same time, Ono scours the Outlands from above, but finds no traces of Beshte. He reports back to Kion, who expresses guilt over Beshte's predicament and tells Ono to search for hippo footprints. Ono does as he is asked, and Fuli suggests tracing Beshte's scent. Bunga attempts to help his friends search, but his antics only succeed in irritating Fuli.

In the volcano, a skink arrives and informs Janja and his allies that Beshte is alone in the Outlands. Though Janja tries to dismiss the situation, Scar appears and orders his cronies to eliminate Beshte. When Cheezi and Chungu wonder how they might accomplish this, Scar declares that he has a plan.

Beshte continues to follow the skinks, expressing his concern over getting burned in the sun, and one of Shupavu's cronies declares that he knows a shortcut that will spare Beshte from the sun. Though Shupavu is dubious of her minion's claims, the skink insists that they must trust him, and the group follows him into a cavern. From afar, Janja and his cronies watch.

Elsewhere, the Lion Guard struggles to pick up Beshte's scent due to the water having washed it away. Eventually, Ono spots Beshte's tracks and leads the team into the cavern through which Beshte had followed the skinks.

The skinks continue to lead Beshte through the cavern until they reach a dead-end. From above, the hyenas reveal themselves, and Beshte desperately tries to warn the skinks away from danger. Just then, the hyenas push a large boulder into the pit's exit, trapping Beshte, and the skinks escape by slithering into crevices in the rock. Without his guides, Beshte is left at the mercy of the hyenas, who continue to push rocks into the pit in the hopes of crushing their quarry.

The Lion Guard overhears Beshte's desperate cries of "Twende Kiboko", and they rush ahead to save him. As Beshte continues to dodge the hyenas' boulders, he explains his situation to the team through the rocks, and Ono pinpoints his exact location. The Lion Guard then rushes off to deal with the hyenas, while Beshte continues to dodge the falling boulders.

Ono guides the team to Rocky Plateau, and Fuli races ahead to stop the hyenas from dropping a massive boulder onto Beshte. As she teeters carefully atop the boulder, keeping it from falling into the pit, the other Guard members rush in and engage the hyenas in a fight. Down below, Beshte starts to clear a path through the fallen rocks.

Eventually, Kion uses the Roar of the Elders to clear the hyenas, and Beshte makes his way to safety. Having failed to eliminate Beshte, Janja decides not to report back to Scar, but Ushari arrives promptly and tells the hyenas that an unhappy Scar wishes to speak with them.

Back in the Pride Lands, Kion apologizes to Beshte for causing such a chaotic situation, but Beshte insists that Kion had only been trying to help. Bunga starts to place a comforting paw on Beshte, but the hippo reacts with pain and realizes that his skin had been burned by the sun. He is quick to leap into a mud pool, but in doing so, he accidentally showers his teammates with mud. Though Fuli is annoyed, the rest of the Lion Guard shares in a hearty laugh. 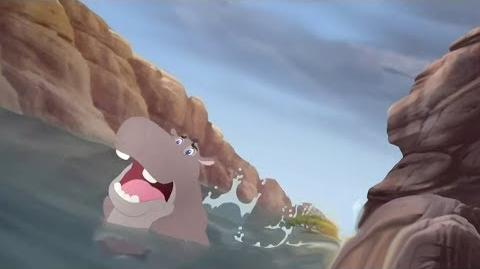 Lion Guard Swept Away, Rafiki's New Neighbors previews
A preview for "Swept Away" 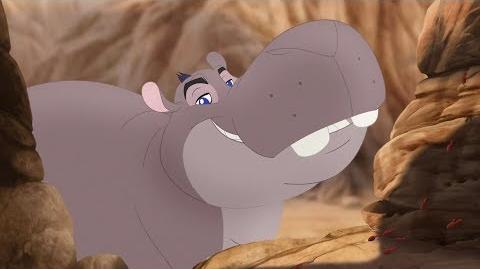 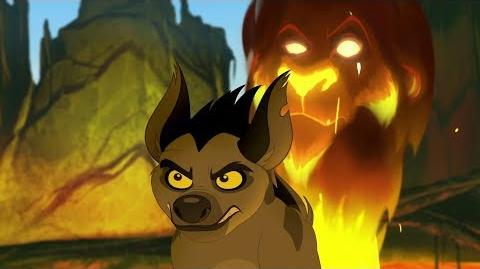 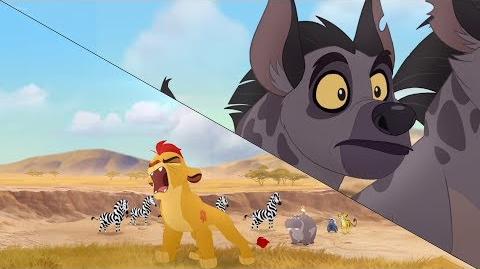 Retrieved from "https://lionking.fandom.com/wiki/Swept_Away?oldid=292557"
Community content is available under CC-BY-SA unless otherwise noted.